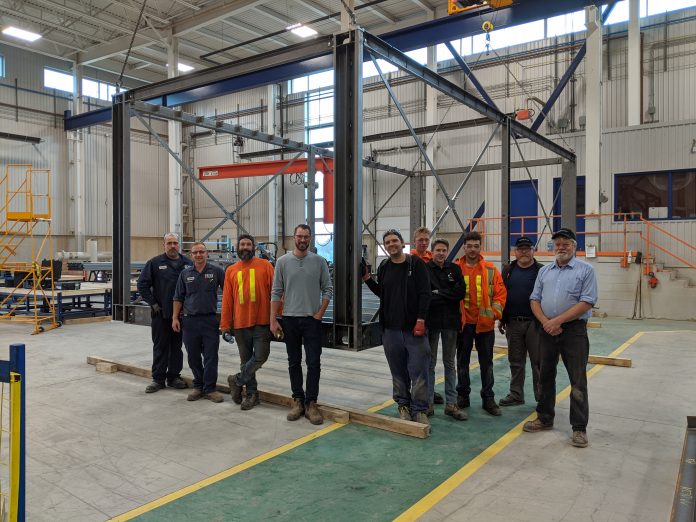 Blair Davies has 30 years of experience growing engineering-based businesses, with a background in ostrategy, marketing, business, and engineering. In addition to now being the chief operating officer at Toronto-based VECTORMINIMA, Davies owns the company Façade Systems, Inc. In need of a prefabricated wall system for that enterprise, he went to inventor, entrepreneur, and modular construction expert, Julian Bowron.

“Julian said, ‘Yes, I have a design for that. But I have something else to show you.’ What I saw was terrific,” says Davies.

“It was an incredibly simple design. Elegant engineering, very easy to fabricate.”

The design was for METALOQ. “It was one of those times when you think, ‘Wow, I wish I’d invented that. It’s so simple but so genius.”

Davies joined Bowron and became the chief operating officer at VECTORMINIMA. The company is rolling out METALOQ, the first of a number of planned inventions. The company describes METALOQ as a modular framing system whereby ‘kits of parts’ are made by steel fabricators and shipped to modular builders.

Crucially, METALOQ doesn’t introduce too much change too quickly. “I’ve been involved in change management and product rollouts over the years,” says Davies.

“METALOQ allows individual players in the supply chain to do what they already know how to do.”

METALOQ is modelled in SolidWorks, a type of CAD (computer-aided design) that’s used in the aerospace and automobile industries.

“I’m simplifying a sophisticated process here, but the idea is that we give the software model to an architect and they can change any component and everything else adjusts in response,” says Davies.

“They don’t have to keep re-doing the engineering and re-drawing everything.”

Davies says METALOQ offers architects creative freedom “because the modules don’t have to be rectangular boxes. They needn’t be stacked directly on top of one another; they can be offset. So you can create soffits.

“You can add parts of modules on the back or front. You could have a podium made of concrete and have retail space and a big atrium, with the modules on top in an interesting pattern.”

From the architect’s completed design, the program creates shop drawings and code for CNC machines, which are sent to a steel fabricator.

“When they see the design, they don’t notice anything unusual. They need only run-of-the-mill, easily available tools.”

The steel fabricator creates the parts (or may choose to contract out some steps) and then that ‘kit’ is shipped to a modular builder’s factory. “We joked that we should ship an Allen wrench with it because it’s so easy to put together.”

All the modular builder needs are a flat floor and three or four people to put the frame together with ordinary hand tools. “And every frame will be perfect, and identical to every other one.”

The perfection of the product — as well as the simple design and ease of assembly — is important to VECTORMINIMA. The METALOQ product tagline is Simply Precise.

“Julian is very good at knowing where there can be tolerances and the process doesn’t have to result in perfection to the millimetre — and also where zero tolerance is necessary, resulting in perfection.”

Identical frames make it easier to install drywall, floors, plumbing, and so on. “On a construction site, you need skilled craftspeople who can adjust to the conditions in the field and, for example, make drywall fit, despite irregularities in the framing,” explains Davies.

In contrast, if irregularities are eliminated, everything fits perfectly and there’s no need for a skilled craftsperson to hang drywall. “You can use multi-skilled manufacturing workers, like in other manufacturing operations.”

Prior experience contributed to Bowron’s understanding and appreciation of precision. Davies tells a story of when Bowron and his team built executive washrooms for an office building in Calgary, Canada.

He said: “These washrooms had back-painted glass, not drywall. For the glass to fit, the framing for the washrooms had to be perfect. Nobody’s going to be grinding glass if a piece is too big.

“You can’t add extra pieces if the glass is too small. That’s the level of precision Julian previously worked to, and he’s rolled that into this invention.”

Frames built using the METALOQ system are much lighter than typical steel frames — 12 to 16 pounds per square foot. “There are other systems up in the 30s, which means they’re harder to hoist and bigger cranes and trucks are needed to move them.”

Despite their lightness, the frames don’t sacrifice strength. “These frames combine roll-formed, light gauge steel with heavier duty brake-formed steel where it’s needed for extra strength,” explains Davies. “There’s no need to use heavier steel where it’s not necessary for strength.”

Davies also mentions the rigidity of the frames. “Julian invented a way to join the floor joist and rim joist that doesn’t involve welding or a lot of fasteners. It’s a simple design that creates a very rigid connection.”

Davies says that METALOQ creates various business possibilities. “For example, one of our clients wants to vertically integrate.

“He’s contemplating creating a steel fabrication company. He wants to buy his own cranes. He may outsource the civil work and the podium to a GC, or he may vertically integrate that too.

“That’s a business model that hasn’t been seen before. There are developers who self-perform, but not to that degree.”

At the other end of the spectrum, Davies says that the steps in the supply chain could be separated and “because METALOQ is so easy to use, you could have a very efficient handoff between one player and the next.”

Another possibility is wood modular builders adding steel frame assembly to the front of their fit-out line, thereby expanding their business in non-combustible and taller buildings.

Davies says that METALOQ is being licensed to businesses that will gain the biggest benefit in their area, and he’s currently in discussions with people in New England, Texas, California, the UK, and the Middle East.

Entrepreneurship and the future

“We’re a couple of guys with some good ideas and a vision, enjoying ourselves. I’ve been an entrepreneur for a while so I understand there are risks,” says Davies. “But I encourage entrepreneurship, because you get used to the lifestyle and it’s fun.”

He emphasises, though, the important effects that he hopes METALOQ will have. “Although we’re talking about bending metal, cutting, and welding, this is really a human thing. METALOQ can have a real impact on the current housing shortage.”