Balfour Beatty has sold 70% of its interest in the BC Children’s & BC Women’s Hospital redevelopment project phase 2 – Teck Acute Care Centre, located in Vancouver, Canada.

Balfour said it had booked £7m profit from the sale and would now be looking to sell further assets to take advantage of a strong secondary market for infrastructure assets.

Balfour revealed it had received a pre-tax profit of £7m from the sale and would now look to sell more assets.

The transaction marks the first disposal from the group’s £1.1bn infrastructure investments asset portfolio since 2019.

The asset disposal is consistent with Balfour Beatty’s strategy of optimising value through the disposal of operational assets, whilst also continuing to invest in new equity opportunities.

The secondary market for assets remains very strong and Balfour Beatty is expected to dispose of further assets in the second half of the year.

In Balfour’s full-year results for 2020, released in March, the company revealed it has enhanced capacity to drive cash generation through earnings growth and restarting disposals of investments assets.

As a result of market uncertainty caused by Covid-19, in 2020 Balfour Beatty did not dispose of any investments assets. In 2021, the group re-commenced the sale of investments assets timed to optimise value to shareholders, as demand for high quality infrastructure assets in the secondary market is expected to exceed supply. 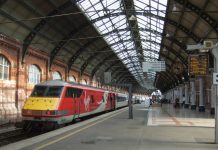 Plans in for £100m transformation of Darlington railway station