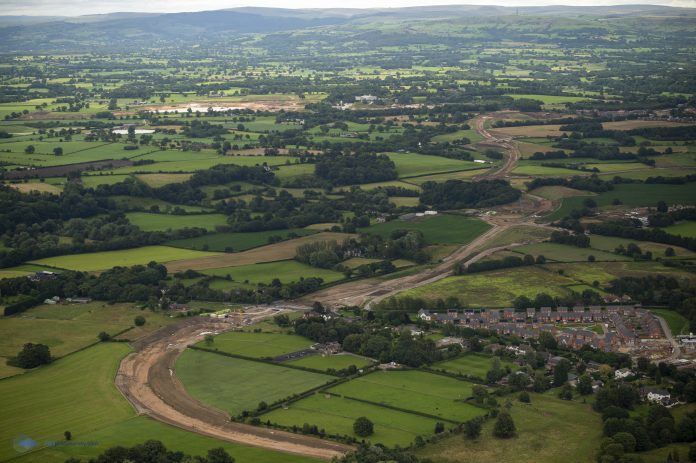 Described as a “crucial piece of infrastructure”, the 5.7km link road will join the A534 Sandbach Road (to the west of Congleton) with the A536 Macclesfield Road

In the opening year, during rush hour, traffic journeys across Congleton are expected to take circa six minutes less than the current rate.

Air quality assessments also indicate that there will be substantial improvements throughout the town centre.

Graham has implemented a five-phase, sequenced programme of works, split into five mainline zones in order to meet the agreed sectional completion dates.

Among the recent milestones is the completion of the waterproofing works to the river Dane structure, which is the final phase of works before surfacing the bridge deck.

When the surfacing has been completed, material earmarked for other areas of the scheme will be transported over the bridge, rather than vehicles travelling through the town. The riverbank erosion protection works are now complete

Significantly, the Giantswood Lane Bridge is complete following the completion in August of the bridge joints, final surfacing and white lining of the realigned carriageway. The Giantswood Lane structure offers a great viewing point of the new mainline currently under construction.

The Chelford road overbridge has been opened to traffic and the realignment of the Chelford Road carriageway will be undertaken before the final surfacing works are carried out.

Permanent sheet piles are currently being installed as part of the works to construct the underground attenuation tank, which will collect excess surface water before been pumped away.

Progress continues on the Loach Brook Bridge with the bridge deck recently been finished. The final concrete pours to the south side of the structure will be carried out during September.

An economic and social regeneration

Graham contracts manager, Alastair Lewis, said: “We are delighted with the great progress of the Congleton link road A536 project so far despite a number of challenges, in particular those presented by Covid-19.

“I hope the aerial photographs give the local community a real sense of the scale and complexity of the project.

“Once complete, it will help deliver economic and social regeneration to the town. At this stage, I would like to thank the people of Congleton for their time and patience throughout the scheme.”