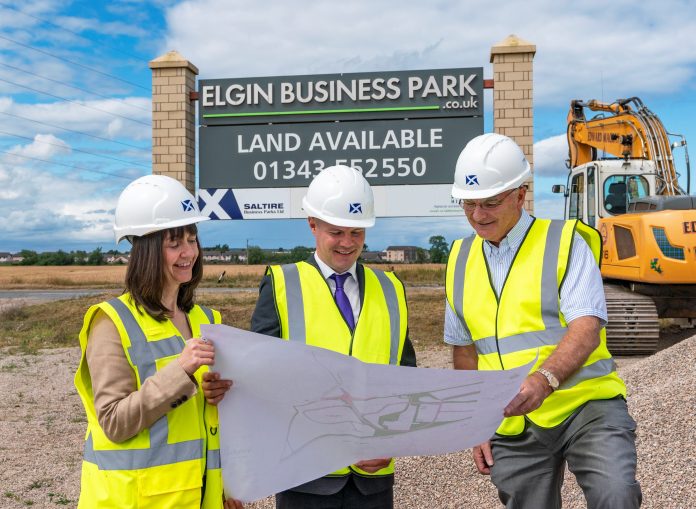 Mackay was joined by Sandy Adam of Saltire Business Parks Ltd and the team behind the project which could see thousands of jobs created in the area over the next ten years.

The first phase of the 125-acre development begins on the site at Barmuckity Farm, on the east side of Elgin. The partnership project has full funding in place, including up to £1.9m from Highlands and Islands Enterprise (HIE). Several businesses are already confirmed for the site, which plays an important part in the continued growth of the Moray and Speyside region.

Interest in the site is growing with planning applications complete for a 61-bedroom Travelodge hotel and long-established Elgin business S&D Harper creating a new self-storage facility. Applications for a drive-through coffee shop and petrol station by Euro Garages are underway.

Elgin Business Park will have a variety of uses including hospitality, retail, office, warehousing and industrial premises. The development of the full site will support an estimated 32 full-time equivalent jobs in the construction industry. The first phase alone is expected to create over a thousand jobs, with the site due for completion around 2024. The site developer, Saltire Business Parks, is also looking to take on apprentices as the project develops in the coming months.

Finance, Economy and Fair Work Secretary Derek Mackay said: “This 125-acre business park may still be in the early stages of development but there’s already much activity on-site and it’s estimated the entire business park will support more than 30 full-time equivalent jobs in the building industry.

“The project, supported by £1.9m from Highlands and Islands Enterprise, is a great example of how we can help the local economy grow. Growing the economy is a key priority, and I want Moray to be seen as a highly successful and competitive region in which increasing numbers of people choose to live and businesses choose to invest. When complete, the Enterprise Park is expected to offer a variety of industrial, office, warehousing, hospitality and retail premises and create hundreds of jobs.”

Sandy Adam of Saltire Business Parks said: “Elgin Business Park is the largest new industrial park in the north of Scotland and could see up to 4,000 jobs created in the area in the next 10 years, playing an important part in the continued economic growth of the Moray and Speyside region. Interest in the site continues to build including planning in place for a 61-bedroom Travelodge hotel adding capacity to the region’s overall accommodation offer as well as several existing Moray businesses who are keen to grow their business but have been restricted due to the lack of land available. Elgin Business Park will allow them to plan for the future.

“We are delighted to have construction underway, with the development supported by Highlands and Islands Enterprise who have invested in this project allowing us to deliver Moray Council’s economic vision for the area.”

Donna Chisholm, area manager for HIE in Moray, added: “We are pleased to be making this investment with Saltire Business Parks which unlocks the potential of this great location in Moray. As this Park grows, there will be more and more job opportunities and space for businesses to flourish, which is good news for Elgin and the wider economy of our area.”