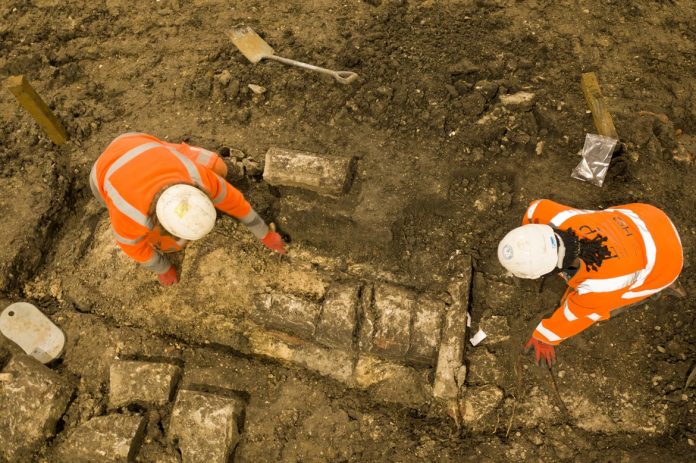 Archaeologists working to prepare the UK for HS2 have begun uncovering almost 900 years of history at St Mary’s Church in Stoke Mandeville, Buckinghamshire

The Old St Mary’s Church in Stoke Mandeville was built in 1080AD, shortly after the Norman conquest that transformed Saxon England.

The site sits on the line of the new HS2 route and is being carefully removed by a team from LP-Archaeology, working with HS2’s enabling works contractor, Fusion-JV.

The construction of a new church closer to the centre of the village in the 1880s saw the building abandoned and falling into disrepair.

According to local accounts, a child was killed by falling masonry in the 1930s, and by 1966 the building was considered so dangerous that the Royal Engineers were drafted in to demolish it.

Over the next 50 years

The rubble pile left became overgrown with vegetation, blending into the surrounding greenery, meaning newcomers to the area may have been unaware of the existence of the church building there previously.

The St Mary’s site is unique and the HS2 scheme is providing a rare opportunity to excavate and understand the history of this building, how its use and meaning changed over time and what it meant to the community of Stoke Mandeville.

In early 2021 works begun on the final phase of excavations at the site.

Over the next six months

A dedicated team of archaeologists, assisted by engineers, will remove the remaining structure of the church and excavate all of the individuals buried in the churchyard.

Around 3,000 burials are expected. Before work on the burial ground began a virtual blessing was given by the Bishop of Buckingham. All remains will be reburied in a local spot to be determined by HS2, with a specially created monument to mark the location.

HS2 is planning to share the discoveries and stories of what life was like in Stoke Mandeville over a 900-year period a series of events and expert lectures in the coming months.

Dr Rachel Wood, project archaeologist for Fusion JV, said: “The excavation of the medieval church at St Mary’s will offer real insight into what life was like in Stoke Mandeville for over nine centuries.

“Those buried there will be remembered once again and the lives they lived over 900 years understood.

“The best way to honour the dead is to understand their stories and how they lived their lives.

“Ultimately, this is what the works at the site of Old St Mary’s church will do, providing a lasting legacy to the present community of Stoke Mandeville.”