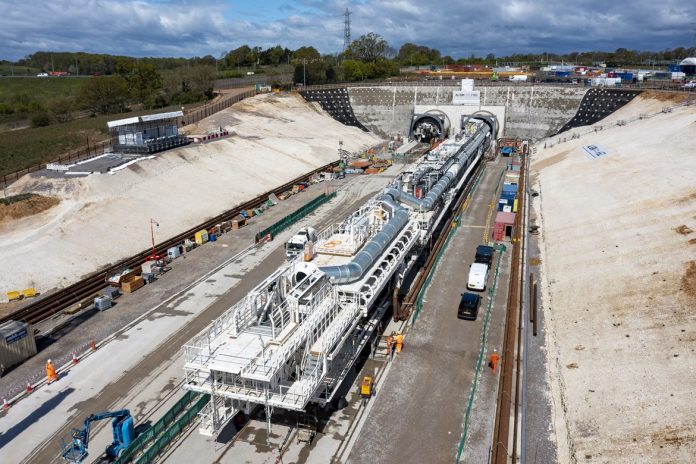 The launch of the first of ten giant tunnelling machines that will dig 64 miles of tunnels between London and the West Midlands, is just the latest example of how HS2 is securing jobs and helping the UK to build back better from the pandemic.

Named after nursing pioneer Florence Nightingale – the TBM will dig the first of a pair of 10 mile long tunnels under the Chiltern hills and help to safeguard the woodland and wildlife habitats above ground.

A second machine ‘Cecilia’ will launch next month to excavate the second tunnel at the South Portal site.

Designed specifically for the mix of chalk and flints under the Chilterns, the two identical TBMs will dig separate tunnels for north and southbound trains.

Each machine operates as a self-contained underground factory – digging the tunnel, lining it with concrete wall segments and grouting them into place at a speed of around 15 meters a day.

Each tunnel will require 56,000 precision-engineered, fibre-reinforced segments – which will all be made on site.

A crew of 17 people will operate each TBM, working in shifts to keep the machines running 24/7. They will be supported by over 100 people on the surface, managing the logistics and maintaining the smooth progress of the tunnelling operation.

More than 16,000 jobs and over 500 apprenticeships are already being supported by the project, which is set to transform transport links between Britain’s major cities, free up space on the rail network for more freight and local services and support the UK’s transition to net-zero carbon emissions.

Align are targeting their recruitment and investment in upskilling local people who are currently unemployed, with a particular focus on women, the under 25s and those with disabilities.

This is another great example of the vital role HS2 continues to play in the UK Government’s Plan for Jobs to protect, support and create employment, which has helped millions of people to continue to provide for their families during the Covid-19 crisis.