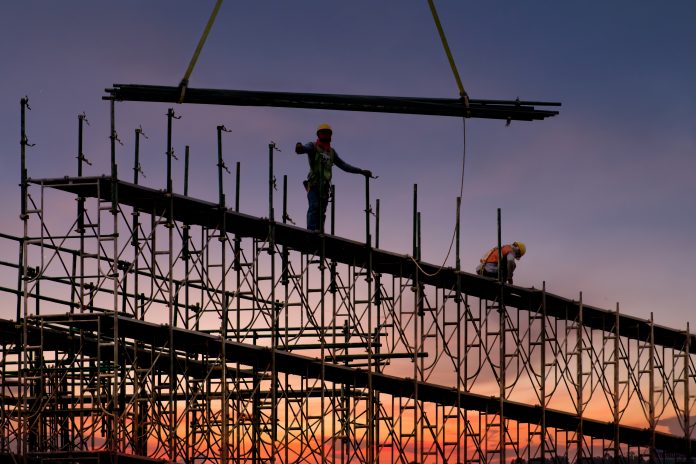 The June construction PMI data has shown housing activity falling for the first time in more than two years. Total business activity grew at the weakest pace for nine months and new orders increased to the smallest extent since last October.

Concerns about the near-term economic outlook led to a sharp decline in business expectations for the year ahead. The data from June has indicated that growth projections are now the least upbeat since July 2020.

The latest reading of the Manager’s Index signalled the slowest rate in expansion since September 2021 and only a moderate increase in construction output.

The most resilient sub-sector in June was civil engineering at 54.3, down slightly from 55.5 in May. A similarly strong increase in business activity was seen in the commercial segment, but the rate of growth eased sharply since May to the slowest so far in 2022 (index at 54.3, down from 59.8).

For the fourth consecutive month, house building was the weakest-performing area of construction activity. Further still, the latest index reading(49.3) indicated an overall downturn in residential work for the first time in over two years.

June data points to a robust rise in total new orders, but the rate of expansion softened to its weakest since October of last year. Some construction companies have noted a lack of new work to replace completed projects due to growing economic uncertainty and inflation concerns.

Suppliers’ delivery times stretched again in June, but the downturn in performance remained less marked than that seen in the first quarter of 2022. Staff shortages and a lack of transport availability were the most cited reasons for increased wait times for construction products and materials.

Survey respondents reported that higher purchasing prices mostly reflected rising energy, transportation and fuel costs. Only 1% of the survey panel signalled a reduction in purchasing prices, whereas around 71% reported an increase. Although still below the survey record high seen in June 2021, the result index signalled a rapid pace of cost inflation that was marginally faster than in May.

Another robust rise in staffing numbers during June has been credited to efforts to boost capacity in response to greater overall workloads. Job creation has been recorded each month since February 2021. Survey respondents commented again on shortages of candidates to fill vacancies, despite higher wage offers.

The loss of momentum in input buying since May was attributed to weaker new order growth and, in some cases, less safety stock building.

While this underlined positive sentiment overall in June, the degree of optimism signalled was the lowest since July 2020. Weaker business confidence has now been recorded for five months running, largely reflecting subject growth expectations for the UK economy, alongside uncertainty about the impact of higher interest rates and escalating inflationary pressures.

“The gloomy UK business outlook and worsening consumer demand due to the cost of living crisis combined to put the brakes on construction growth in June. Commercial construction saw a considerable loss of momentum as clients exercised greater caution on new spending, while long-term infrastructure projects ensured a relatively resilient trend for civil engineering activity.”

“House building has expanded more quickly than the rest of the construction sector over the course of the pandemic, but now finds itself as the worst-performing broad category so far in 2022. Moreover, the latest survey indicated an outright decline in residential work for the first time in just over two years.”

“Construction companies appear braced for a difficult second half of the year as new order growth and business activity expectations fell again in June, reflecting inflation concerns, higher interest rates and less favourable domestic economic conditions. Measured overall, the degree of optimism across the construction sector is now the lowest seen since July 2020.”

“Residential building levels fell for the first time since May 2020, and builders are getting an increasingly stark vision of the marketplace they are now operating in as overall activity growth also fell sharply.”

“This is in glaring contrast to the pandemic years where the construction sector held up well compared to the other sectors, but the weakest rise in output since September 2021 and the softest increase in new orders since October shows this has now changed. The heightened competition faced for short supply raw materials as well as essential skills for the building trade is squeezing the optimism out of builders with the lowest business expectations since July 2020.”

“Returning from pandemic lockdowns has not been easy as builders now face greater affordability challenges not just for staff wages but for the energy-intensive materials needed to deliver the pipelines of construction work they currently have.”