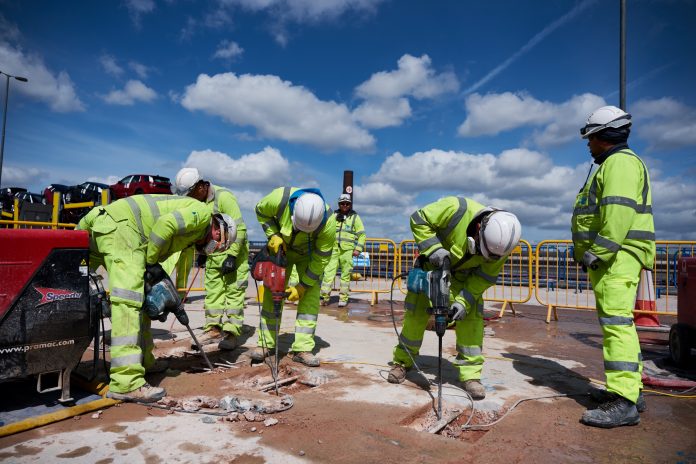 Valued at over £100m, the M5 Oldbury Viaduct Major Renewal Scheme saw the section of the M5, between junctions 1 and 2 in Sandwell, repaired.

Originally constructed in the late 1960s and opened in 1970, the viaduct is a 1.8 mile long elevated section to the west of Birmingham. Although the viaduct was structurally sound, Highways England realised the need to carry out essential repair work to the concrete decks, deck ends and cross-head beams as the waterproofing system and expansion joints on the motorway deck had degraded over the years.

Repairing the southbound carriageway at M5

The decision to repair this section of motorway was based on the current condition of the viaduct and to avoid large-scale projects occurring at the same time around the ‘Birmingham Box’ – the M5/M42/M6.

The work formed part of the government’s long-term Road Investment Strategy to build a modern and resilient road network which would last well into the future.

The viaduct is split into 165 separate steel-reinforced concrete deck sections (slabs) linked by expansion joints in the gap between the ends of each section. A waterproofing layer then protected the decks, but this had deteriorated over time, resulting in chloride contaminated water permeating into the concrete and causing the reinforcement to corrode and spall.

The concrete repair work was carried out in three stages to allow for continued two-way traffic flow. The first was the southbound carriageway at M5, followed by the northbound section and finally the central reservation.

CRL was appointed as the concrete repair contractor alongside VolkerLaser. The principal contractor was a joint venture between BAM Nuttall, Morgan Sindall and VolkerFitzpatrick – known as BMV.

The concrete repair work carried out by CRL involved the northern section of the viaduct closest to Junction 1, comprising a 0.93 mile stretch of deck, covering 50,000m2 – essentially half the viaduct. Even though the nature of the contract was typical of the type of works commonly undertaken by CRL, the scale of the work was unprecedented.

Work on the concrete repair scheme

The work process started with BMV planing off the existing surfacing and removing the failed waterproofing system. A third party – Socotec – then tested the deck to identify where concrete repairs were needed. Hammer testing identified where the concrete had delaminated, and half-cell testing pinpointed areas of potentially corroded steel.

Once the areas requiring repair were identified, operatives were able to saw cut around the patches that needed repairing and proceed with the hydro-demolition. A 3m x 3m enclosure was created and surrounded with two layers of debris netting to contain flying fragments of concrete.

The next stage of the process involved replacing badly corroded reinforcement. CRL used a number of on-site welding devices/systems to connect the new reinforcement to the existing.

The broken out areas were then filled in with a high performance, free-flowing concrete repair micro-concrete conforming to the requirements of Highways England Specification for Highways Works and EN1504-3 Structural and Non-Structural Concrete Class 29F.

Due to the scale of the repairs, large 500kg bags of repair material were used instead of the standard 25kg bags. This eliminated manual handling as the bags were lifted using telehandlers and an opening on the bottom allowed for the material to be discharged directly into large pan mixers.

As repair work was required to be carried out throughout winter months, CRL implemented a winter working procedure whereby a heated enclosure was constructed over the completed repair.

Once all the concrete repairs had been carried out on the southbound carriageway, the area was handed over to the deck waterproofing team before the CRL team moved to the northbound carriageway for a period of 10 months, replicating the processes used for the first phase.

Highways England says it is “working hard to complete the remaining waterproofing on the northbound carriageway alongside the central reservation and new concrete barrier that we’ve installed.”

Once that work is complete, the remaining roadworks on the northbound carriageway will be removed ahead of fully re-opening three lanes of traffic before Christmas.