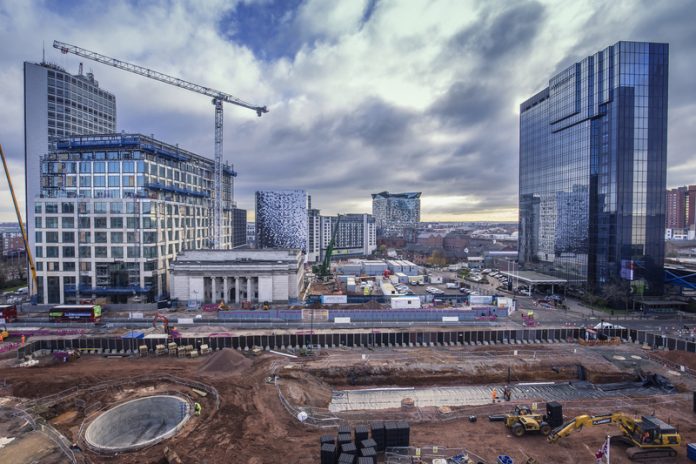 The new office build in the Paradise area will cover more than 183,000 square feet and is expected to be finished in 2019.

When combined, both buildings in the Paradise area will contribute more than 350,000 square feet of retail and office space to the expanding construction activity in the city.

The completed scheme will provide up to 10 new flagship buildings containing offices, shops, bars, cafés, restaurants and a four-star hotel in the centre of Birmingham.

BAM Construction won the contract in 2017 and will manage over 200 workers to start the build.

The construction company will create the frame of the building and erect two new tower cranes in April to assist with the work.

Paradise, formerly named Paradise Circus, is the name given to an area in Birmingham city centre between Chamberlain and Centenary Squares.

“The start of work on Two Chamberlain Square, our second speculative office building, underlines the momentum gathering around Paradise and marks yet another milestone for the city’s most vibrant, mixed-use development,”

Two Chamberlain Square will be an exceptional building, leading the way in modern workplace design and performance.

As it takes its place on the city’s ever changing skyline over the next year, it will deliver a prestigious commercial address at the civic heart of Birmingham.

“BAM is already working closely with the Paradise team to deliver this prestigious, landmark building.

We’re bringing ultra-modern construction techniques to this complex site in the civic heart of the city, surrounded by some of the country’s most beautiful Victorian buildings.

Argent and BAM started our industry-leading partnership in 1994 with the first new building at Brindleyplace and we have now delivered over 30 award-winning buildings together.