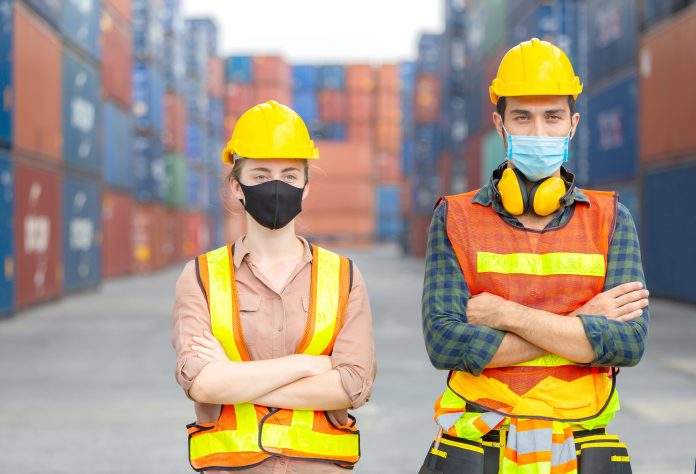 The total value of construction contract awards in October 2020 was £4.9bn based on a three-month rolling average, according to Barbour ABI’s Economic & Construction Market Review

This is a decrease of 9.4% on September figures and follows three consecutive months of good growth. Annual comparisons show it as 1.1% lower than for October 2019. 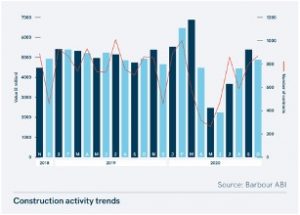 There was an increase of 8.7% for contract award numbers this month at 871 compared to September.

The North West was the leading region in October with 19.8% of awards and a total of 120 projects. 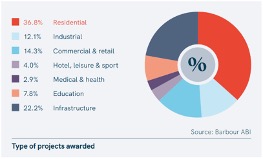 The second largest region was London with value share of 13.8%, whilst tying for third place was the East of England and Scotland both with 11.1% of awards.

Analysis by sector indicates that residential maintained lead status in October accounting for 36.8% of awards. Underpinned by some major civils awards, infrastructure was the second largest region this month with 22.2% of awards and 131 projects.

Tom Hall, chief economist at Barbour ABI and AMA Research said: “The value of contract awards decreased from £5.4bn in September to £4.9bn in October but the number of awards continued to increase month on month.

“It is encouraging that since coming out of the first UK-wide lockdown, contract awards remain at long-term average levels.

“While there remain many downside risks, more positive news has emerged over the last month, not least construction sites staying open over the second lockdown plus positive vaccine trials.

“We therefore have a greater level of confidence that activity will be maintained over the short term.”