Growth in construction output has flatlined, despite a slight incline in new construction contracts awarded in May 2019, according to the lasted ONS figures

Estimates in this release are consistent with the GDP quarterly national accounts, UK: January to March 2019 publication released on 28 June 2019.

The monthly business survey, construction output, collects output by sector from businesses in the construction industry within Great Britain. Output is defined as the amount chargeable to customers for building and civil engineering work done in the relevant period excluding Value Added Tax (VAT) and payments to subcontractors.

This year, because of the very demanding set of changes being put through in the annual update, we are exceptionally not going to fully reconcile 2017 annual data, instead of producing an indicative balance to allow further time for final quality assurance of the data.

Consequently, the reference year and last base year for all chained volume measure series will remain as 2016.

Construction output in May 2019 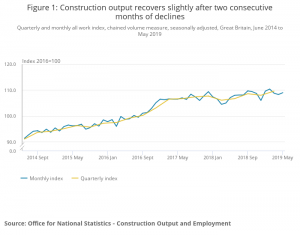 Construction output growth was flat (0.0%) in the most recent three-month period in May 2019, as compared with the three months prior. This reflects a weakness in March and April 2019, which saw declines of 1.5% and 0.5% respectively, followed by relatively slow growth of 0.6% in the most recent month.

It should be noted that the previous three months (December 2018 to February 2019), on which the three-month on three-month growth of 0.0% is based, includes a dip in output figures in December 2018, which recorded the lowest monthly output seen at any point within the last 12 months, and the sharpest monthly fall in the series since March 2016. 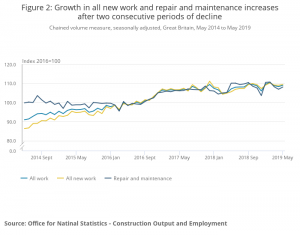 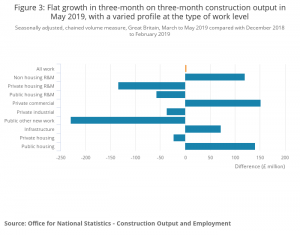 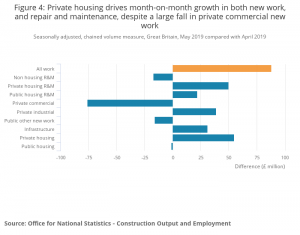 When looking at the month-on-year series, there has been a growth of 1.7%. This was driven by increases in infrastructure and private new housing of 13.6% and a 6.6%, with a more minor contribution to growth from a 25.8% increase in public new housing. Although a number of series saw declines, most notable contributions came from private commercial new work and private housing repair and maintenance which both fell by 6.8%. 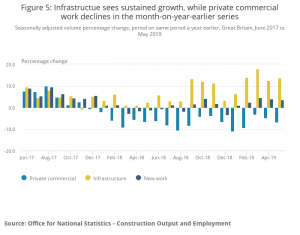 This is the first monthly release to incorporate the revisions made in the GDP quarterly national accounts, UK: January to March 2019 release, published on 28 June 2019.