The residential sector is looking positive after an upturn in construction contracts awarded during February, according to the latest analysis by Barbour ABI

The top project awarded during February was the redevelopment of Chelsea Barracks which sees Multiplex Construction Europe provide a total of 97 residential units set across three buildings. The largest infrastructure contract was the £110m redevelopment of the former Royal London Hospital site in Tower Hamlets to provide a new civic centre and council offices. The largest overall education contract was in Edinburgh and was the £90m redevelopment and extension of the Darwin Building for the University of Edinburgh. 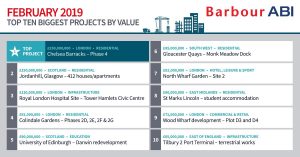