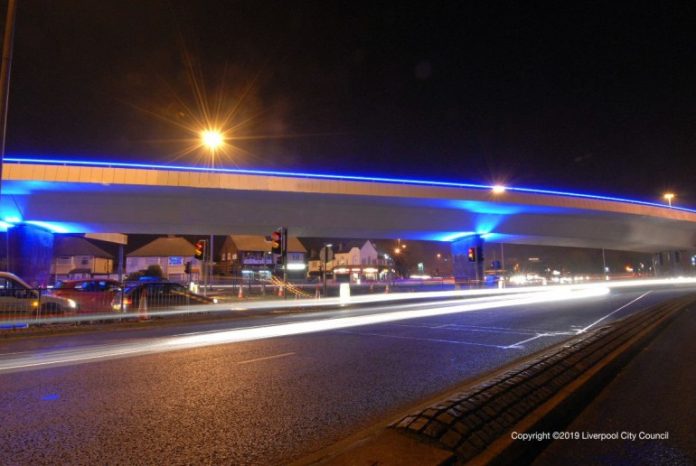 Transport for the North has included Liverpool City Council’s Rocket Junction scheme as one of four major projects within a £700m programme of works that have been identified as critical to the economic growth of the north of England.

The draft proposals for the major upgrade to the Rocket Junction would include the demolition of the existing Queens Drive Flyover and replacing it with a new roundabout, featuring a dual lane underpass.

The Rocket Junction is the busiest in Liverpool city region with over 100,000 vehicles travelling through it every day. It connects the start of the M62, with the A5080 and the A5058 Queens Drive.

Due to increasing traffic, the junction is currently functioning at full capacity in the morning and evening peak hours, and this is expected to deteriorate further in the next five years.

Liverpool City council has recently declared a Climate Change emergency and sees the scheme as a huge part of its programme to reduce congestion and air pollution in the city.

Physical signs of weakness in the Queens Drive Viaduct have also prompted investigations which indicate that significant investment is needed to upgrade the structure.

As well as the removal of the flyovers, the existing signalised junction will be reconfigured to incorporate a traffic signal controlled gyratory with provision for through traffic travelling north/south on Queens Drive. It is known as a ‘hamburger’ type layout, where the main road passes through the centre of the roundabout.

The Rocket Junction Upgrade project will reduce congestion and improve the length and reliability of journey times. The design will also be developed so as to enhance road safety and improve connectivity for pedestrians and cyclists with a more pleasant, greener environment for all users.

The bid to the Department for Transport is for £92m with Liverpool City Council contributing the remainder via its £500m Better Roads programme. If approved, it is anticipated works for the scheme would begin in 2023.

Mayor of Liverpool Joe Anderson, said: “The Rocket is not fit for purpose – it can no longer cope with the traffic coming into the city via the M62 and as welcome to Liverpool is a hugely negative experience.

“As we all know, the junction is flawed as the motorway should have come all the way to the edge of the city centre but stopped at the Queens Drive ring road instead.

“In its current state the Rocket junction is causing commuter misery every single day and by its flawed design is causing congestion and contributing to greater air pollution.

“We need the M62 to work for Liverpool and the wider city region – for our economy and our environment. This scheme needs a huge amount of development and consultation to get it to the stage of delivering it but if the government is serious about investing in the Northern Powerhouse, this is a scheme that will certainly unleash huge benefits for all concerned be they commuters, businesses, residents and visitors to our city.”

Peter Molyneux, major roads director at Transport for the North, added: “As part of our pan-Northern bid for £700m of investment in our roads, we’re pleased to put forward for funding the upgrade scheme for the Rocket Junction, working in partnership with Liverpool City Council.

“As the busiest junction in Liverpool, with more than 100,000 vehicles travelling through it each day, this is a pivotal project that will have wide-reaching benefits for people and businesses.

“As well as bringing journey times down locally it will also have a positive impact on the wider motorway network and support the city’s ambitious growth plans.”