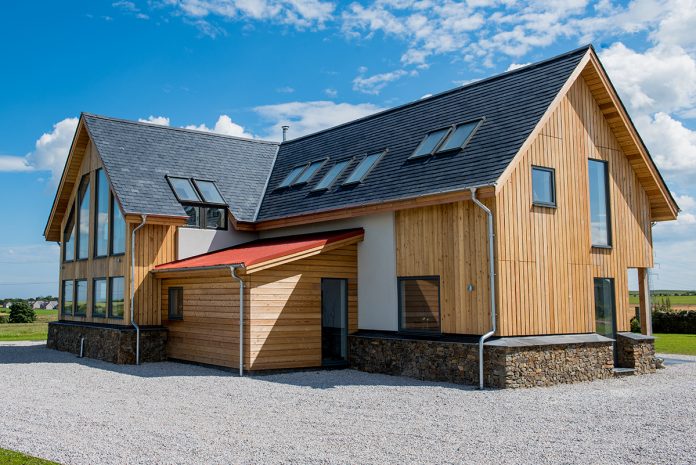 Scotframe, just like the timber frame market in general – is going from strength to strength in 2018. We’ve just expanded into England with the launch of our new permanent sales office and showroom at the National Self Build & Renovation Centre in Swindon. We are confident that this new presence south of the border will help us tap into the English self-build market, which is growing thanks to the recent Right to Build legislation.

Scotframe is an industry leader in the supply of full timber kit packages for housing and commercial projects in the UK. Established in 1989, we have grown steadily and now have 160 employees and a £35m turnover. We have two manufacturing facilities in Inverurie and at Cumbernauld, as well as sales offices and showrooms at Inverness, Dundee and now Swindon. We have over 28 years of experience and expertise, during which time we have supplied over 30,000 houses.

According to a new report by MTW Research, timber frame is the fastest-paced sector in the UK housebuilding market and is experiencing profit growth. Findings suggest construction of timber buildings is set to top 60,000 units in 2018, with orders exceeding £700m in value.

The report reviews market share by sector: open panel, closed panel, SIPs, post and beam and volumetric. In every single sector, despite the challenges of Brexit, growth continues to outpace inflation for most products.

This backs up the Structural Timber Association’s findings that the market share for timber construction is steadily rising. I believe this trend will continue, helped by offsite technologies such as cross-laminated timber and structural insulated panel systems.

Most UK homes may still be built using traditional masonry, but with a shortage of site skills and the rising cost of materials, even the biggest housebuilders are likely to start considering using timber frame more frequently in the near future.

Indeed, the recent MTW research suggests that timber frame is no longer regarded as an unusual option. Of course, it has been that way in Scotland for many years, where 83% of new build homes use timber frame, compared to just 23% in England.

Scotland’s love affair with timber frame could partially be explained by its impressive thermal performance, which is particularly welcome in our colder climes. Up to 90% of the kits we supply use our closed panel system, Val-U-Therm Plus, which allows the construction of family homes that could cost less than £95 a year to heat and are virtually zero carbon. Timber frame is also a particularly attractive option for self-build, which has always played a larger role in Scotland, but is now growing in popularity south of the border. 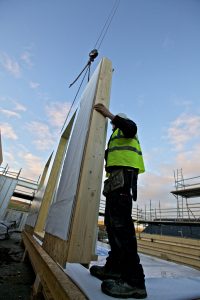 The current shortage of social housing – which is more traditionally associated with timber frame construction – also presents a huge opportunity for timber companies. The lack of sustained investment in new build social housing in recent years has dampened timber frame growth. However, I believe that this will change as the UK government begins its plans to build hundreds of thousands of new homes over the next few years to address the overall housing shortage.

For social housing, offsite timber frame construction is perfect – homes can be built faster and to a higher sustainability standard when compared with traditional construction methods, making them more cost-effective to build and live in. This has the extra bonus of addressing the issue of fuel poverty, as residents will benefit from reduced heating bills. As such, it’s an ideal solution for social housing providers working to tight budgets and timescales.

The MTW research also identifies several threats to the timber frame industry, such as the risk of a slowdown in housebuilding growth, Brexit and raw material pricing pressure impacting on profitability.

MTW suggests this is likely to result in a growing number of mergers and acquisitions in the next few years. Of course, Scotframe has already been through this process when it was purchased by global company Saint-Gobain in November last year. We see this as a huge positive for our business. Being part of the Saint-Gobain group, which has 18,000 employees in the UK alone, will accelerate our expansion into markets south of the border and enhance our financial security, putting us in a very favourable position to take advantage of further growth.

Scotframe’s annual turnover in England is currently £2.5m, and we hope to treble that figure over the next three years. It’s an optimistic figure, but against the backdrop of the growth of timber frame, and with the backing of Saint-Gobain, we believe it is a realistic aspiration.