Construction equipment sales fell by 39% in the UK during the first six months of the year, compared with the same period in 2019

The impacts of the Covid-19 crisis were felt in the second quarter with construction equipment sales falling 54%, after a 22% decline in the first.

As many construction workers returned to work in June, the pattern of sales started to recover for that month.

Although the decline in sales in June was 36% below 2019 levels, it is an improvement on the more significant falls of 74% in April and 54% in May. 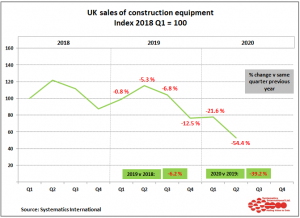 The latest report from CEA data analyst, Paul Lyons suggests that the low point in new construction equipment sales was reached in April, with sales just below 800 units.

A fall in many equipment types 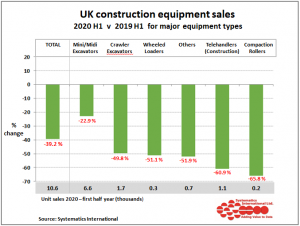 Other equipment types experienced falls of 50% or more in sales, with telehandlers (for construction only) and compaction rollers seeing the biggest declines of over 60% compared with 2019.

Sales of construction equipment have been most resilient in Wales and the West Midlands, where figures have been down by only 19% and 26% respectively.

Other areas where sales have been better than the average national decline are the North West, Yorkshire, Northern Ireland and London.

Weakest sales have been in the South East (excluding London) – down by over 50% compared with last year.

The construction equipment statistics exchange also covers retail sales of equipment in the Republic of Ireland. This shows a 30% decline in sales in the first half of 2020, compared with 2019. Sales in the first quarter were only 8% down on last years’ levels, but then fell by 51% in quarter two.