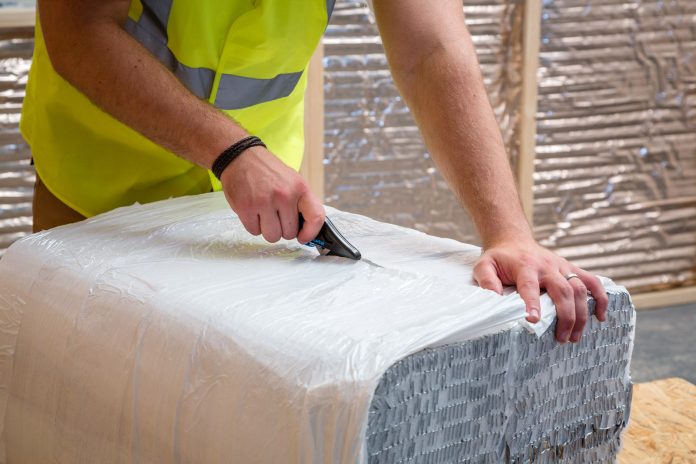 David Ball, site manager at Barnstaple-based Anderson and Evans says the discovery of the Actis specialist cutting tool has been transformative

Anderson and Evans are midway through transforming a traditional pole barn into a dramatic 8,500 sq ft six-bedroom family home on a farm in Pippacott.

David Ball is insulating it with thousands of square metres of products from the Acris Hybrid range. Ball said that the discovery of the Actis cutter – courtesy of Actis South West area sales manager Tom Hendzel – has made his life ‘ten times easier.’

He has used Actis Hybrid products in the past, in much smaller quantities, whenever it’s been specified by the architect.

A house of this size is going to require an impressive amount of insulation.

It contains special features which set it apart from its sister product for walls, including the addition of a lap and the inclusion of built-in adhesive tape.

A piece of adjustable plastic on the tool, which is held in one hand,  pinches the insulation or membrane and can be moved up or down to suit the thickness of the product, leaving the other hand free to hold the material.

Tricky areas such as doors and windows, which require accurate and straight-angled cuts are made much easier and faster with the tool as it pinches and holds the product at the same time, increasing the ease and speed of installation.

The house Ball is building is a timber frame conversion under a Part Q  listing of an existing traditional metal pole barn.

In addition to the six bedrooms, a games room and garage, the central third of the building will be a vaulted open-plan space with a glass bridge with full height living quarters at each end.

He aims to complete the conversion in March or April 2021.

As far as insulation goes it’s as enjoyable as you can make it!

Ball said: “I must admit, insulating is always a chore. But using Actis is more pleasurable than most other forms of insulation. It’s clean, easy and quick and as good as I could possibly hope for!

“It depends on the stage at which we’re commissioned, but if we get in there in time we can see if they can change the specification if they had gone down the traditional insulation route.

“When an architect specifies products to achieve the necessary U-value they sometimes specify rigid board. Where possible, if we can, we ask them to swap to something we prefer.

“As long as it can maintain a sense of integrity and ensure the required U-value, we would much rather use Actis than rigid insulation.”