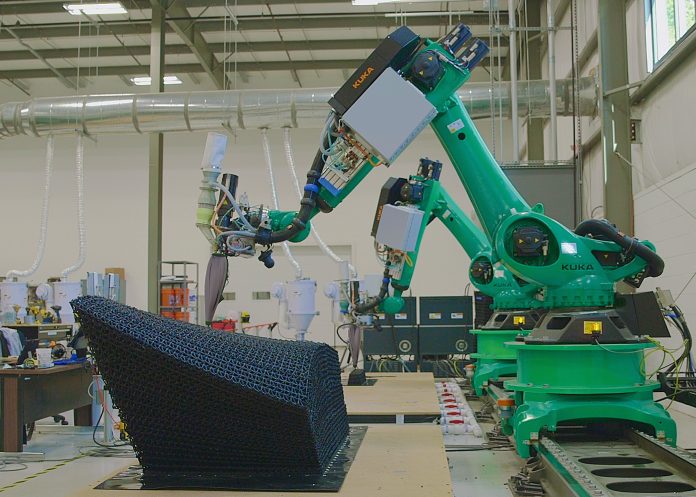 When you think of 3D printing buildings, you probably picture giant outdoor robot gantries “pooping out concrete”, as John McCabe of Branch Technology puts it. Layer upon layer, gradually building up the walls “as has been done for millennia” — only now with robotics

Branch’s facility is far from chaotic — it’s a precise robotic ballet, with multiple projects being coordinated at the same time.

The structures that Branch robots print are also very different from layers of undifferentiated concrete. They are complex lattices that can be manufactured from various substances, have many different shapes and sizes, and be filled with different materials.

“Think about it. Very few buildings are made of only one type of material,” says McCabe.

Branch’s 3D printing “uses 20 times less material than other 3D printing methods, with almost no waste” and the resulting structures are many times lighter than a similar size structure printed with concrete. Although they’re light, the structures are designed for strength too.

“When we fill that space with a customised foam, we can get almost 10,000 pounds of compressive strength.”

The lattice structures can be filled with various materials with different properties such as sound attenuation or thermal insulation. Sensors can be embedded within the materials to create a smart building.

Branch has printed a 3,000 square foot single story house. McCabe says it’ll be a few years before they can focus on building tall, self-supporting structures because the materials currently can’t compete with the capabilities of steel. “For the same reason, it’ll also be a long time before 3D printing with concrete can build taller than one storey.”

How was Branch founded? In 2013, there was a Kickstarter project for a 3D printing pen that could print in midair. Branch founder and chief executive officer, Platt Boyd, bought one and played around with it, attaching it to mini-robots. He decided the idea had commercial potential in the construction industry, left the architecture firm where he’d worked for over 15 years, and moved to Chattanooga to found Branch (Chattanooga and the surrounding area is a hotbed for innovation, especially in advanced manufacturing).

“The company was embraced by the Chattanooga startup culture and the first employees were rockstars who came here from places like New York City and Boston. For the most part, they’re still here,” says McCabe. “We now have about 30 people working here and they’re the smartest group of people I’ve ever had the good fortune to work with.”

Because 3D printing is so versatile, Branch often received requests to make random things. But Boyd decided they needed to focus and the company went all-in on developing 3D printed façades. “They’re a great non-structural way to add a signature look to a building while still embracing the traditional construction trades.”

It’s a persistent refrain that it’s hard to hire young people to work in the construction industry, and labour shortages are a major problem. But working in the Branch facility is a far cry from a typical construction environment and Branch hasn’t had hiring problems.

“I’m privileged to work with a large, diverse group of young people who are very excited about robotics and the future of construction. They want to work in this industry.”

Branch has a team focused on developing solutions for the Department of Defense. “We’ve been taking speculative ideas and creating advanced manufactured products to fit their customised need,” says McCabe.

“The kind of project ranges from a logistics solution for high-tech equipment, a building façade for onsite housing, or lightweight EMP-hardened expeditionary structures.”

They also work with the Air Force and the Space Force, leaning into this since 2017 when, out of a field of 77 global competitors, Branch won first place in the NASA Martian Habitat Challenge. The material they co-developed for printing the Martian habitat was the equivalent of 70% Martian soil, mixed with 30% recyclable mission waste such as bags and parachutes.

“The Space Force is expanding their knowledge and capabilities in off-world construction. We’ve been involved in developing zero-g and other-world concepts to save fuel and time, as well as to protect our service-people and equipment from harm.”

“In the long term, we want a distributed factory network around the world that can print, fill, and finish structural and non-structural components for buildings of all scales,” says McCabe.

“We have a roadmap to get there. We have some great partnerships in the pipeline and it’s going to blow some minds when we can finally talk about them!”

This article was first published in the November/December 2020 Edition of MBI’s Modular Advantage magazine.