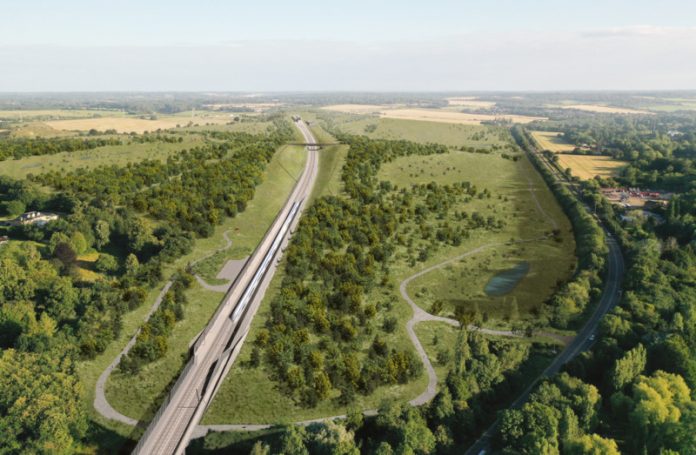 Chalk grassland is a habitat of international conservation importance mainly found on limestone and chalk valleys of south-east England and the Isle of Wight.

As part of the ambitious scheme, 90 hectares of chalk grassland will be seeded into re-profiled soil layers using the nutrient-poor subsoils on the site and mixing these soils with chalk from the tunnelling and recycled concrete and aggregates from construction works.

The design of these soil profiles will be completed through collaboration with Cranfield University and Tim O’Hare Associates in an innovative research study that will use the results from both laboratory and on-site trialling of the soil layers.

This will sit alongside new areas of woodland, wood pasture and wetlands, including almost 65,000 trees and shrubs of 32 species and nearly 3.5km of new hedgerows.

Around 4.5km of new footpath, cycling and horse-riding routes will give the public areas to large parts of the site, which sits between the Colne Valley Regional Park and the Chilterns AONB.

Align is responsible for the Chiltern tunnel’s south portal compound – where the giant tunnelling machines are being launched from. In total, around 3 million cubic meters of chalk will be excavated from the tunnels and reused in the landscape restoration alongside crushed concrete and limestone aggregate used in construction – taking away the need to remove the material by road.

New planting and seeding will create an extensive mosaic of habitat that which would be a perfect home for hundreds of species of flora and fauna, including invertebrates, birds, mammals, reptiles and amphibians.

HS2’s environment director Peter Miller, said: “The Western Valley Slopes project is one of the most important parts of our Green Corridor programme to establish better connected, sustainable and biodiverse landscapes along the route of the new railway and will contribute substantially to HS2’s carbon reduction target.

“It demonstrates HS2’s approach to addressing many of the complex issues surrounding climate change and which are central to protecting our environment, and is a great example of how good design and planning can mitigate the effects of climate change.

“A huge amount of work has gone into the planning for this ambitious project and it’s great that that’s been recognised in the schedule 17 approval.”

Phil Williams, lead member for environmental services, climate change and sustainability, at Three Rivers District Council, added: “We welcome the plans to transform this site which will significantly enhance local biodiversity as well as providing a great new visitor attraction and amenity for people in Three Rivers and further afield.

“The design has evolved from the original proposals thanks to the work of council officers and engagement with the Colne Valley Regional Park Panel, which includes a range of local groups, working collaboratively to achieve a more distinctive and sensitive outcome in the Colne Valley.”