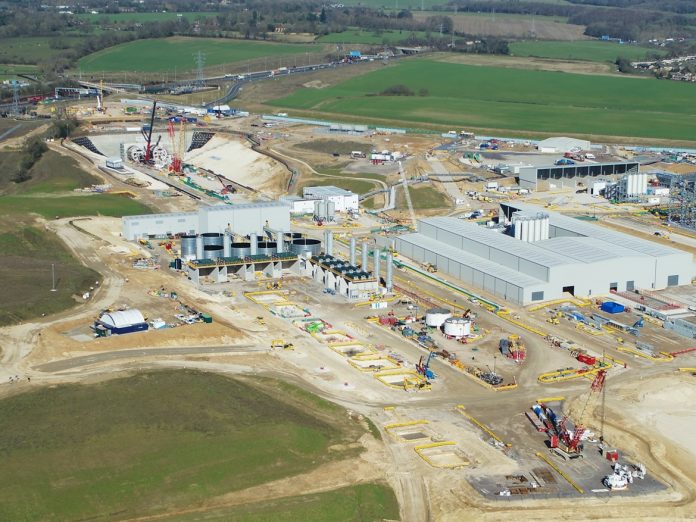 The chalk cut away by the 170-metre long TBMs will be mixed with water before being pumped out as slurry back along the tunnel to its entrance.

Slurry from boring the tunnels will be processed on site at a construction base just inside the M25 motorway – avoiding the need to transport the waste off-site for reprocessing elsewhere.

One of the key challenges the separation process faces is preventing the thickening slurry from clogging up the filtering machinery.

Working with its supplier MS, which has delivered the slurry treatment plant, HS2’s civils contractor Align opted to use a polymer specifically developed to be effective with Chilterns chalk, which will enable the entire separation process to happen in around a week.

After which the chalk cake will be used to deliver HS2’s Colne Valley Western Slopes project – part of its Green Corridor programme to re-establish the locally distinctive chalk valley landscape and create the right growing conditions for calcareous grassland across the site.

The initiative will be a major contributor in helping HS2 meet its carbon reduction targets by delivering significant ecological gain in the Colne Valley, reducing road haulage, and enabling habitats to sequester carbon by replacing arable land with natural habitats.

Almost 65,000 trees and shrubs comprising 32 species will be planted together with nearly 3.5km of new hedgerows. Around 90 hectares of chalk grasslands will be created and areas of historic woodland reinstated.

“In addition, it means this slurry can be used to support the creation of 127 hectares of valuable new habitat, a key part of HS2’s fantastic Green Corridor plans.”

Nick Podevyn, innovation manager for HS2 contractor, Align, added: “Anybody who remembers classroom blackboards knows that chalk is dusty, so to avoid that and carry the freshly-cut loose chalk to the surface safely it’s mixed with water at the cutter head.

“However, the scale of the project demands an innovative solution to deal with the 4.5 million cubic metres of waste slurry that will be extracted over the next three years.”