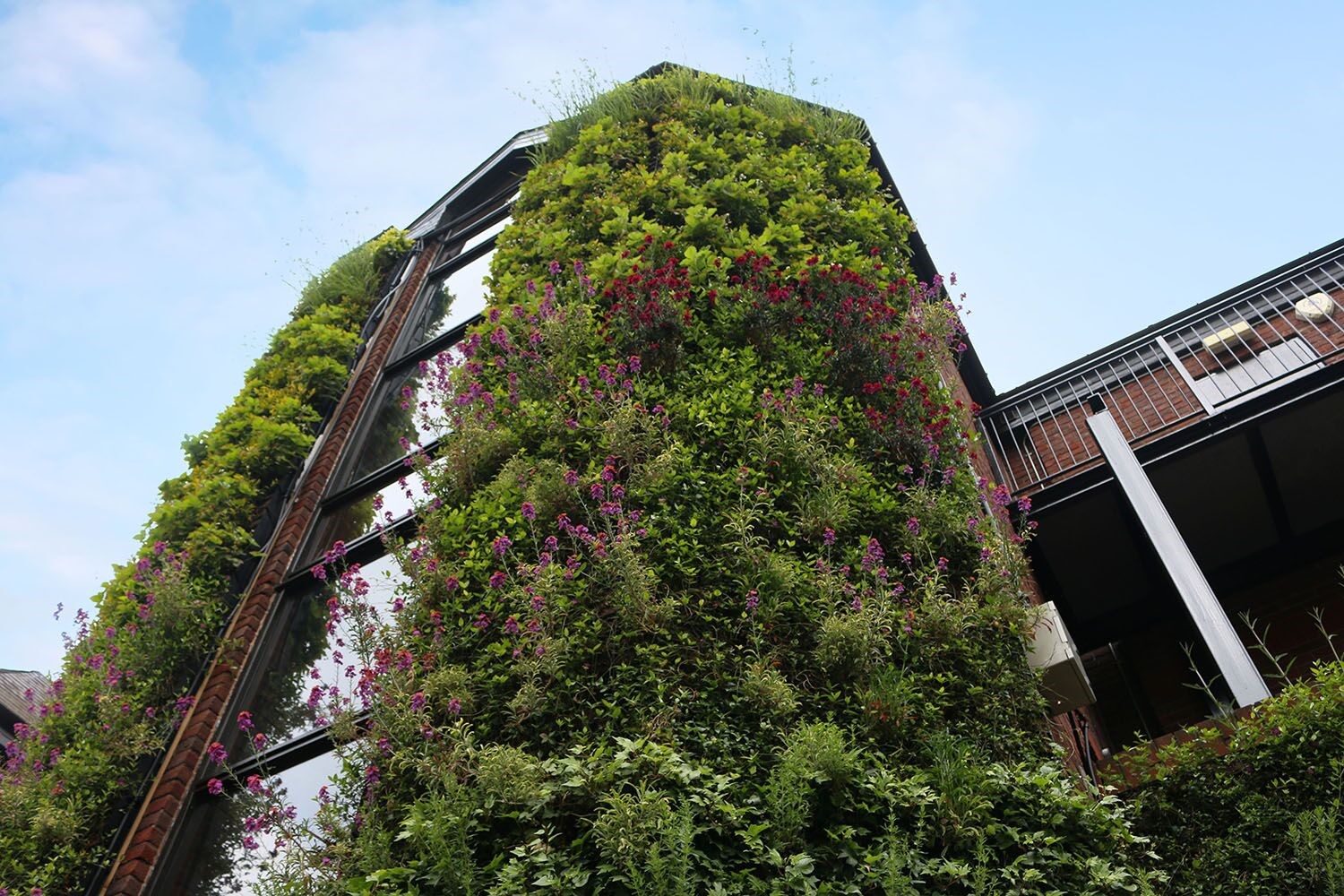 Home Planning & Construction News How the built environment can reduce the risk of heart attacks and...

One of the biggest challenges facing the construction industry is its impact on climate and public health. Urban greening is rightly becoming a fundamental part of city construction, not only to transform ugly urban eyesores but to turn them into green lifelines. Steve McIntyre, Urban Environment Consultant, ANS Global, outlines why green choices are key to creating a healthier future

It is estimated that 58% of forests, gardens and farmland is lost to development each year  – the price of growing cities to accommodate urban residency comes at a significant cost. Yet the loss of green space isn’t the only issue, with dangerous levels of air pollution now found in more than 300 UK cities, concern has turned to the long-term impact on public health.

In January, a study by the British Heart Foundation revealed that unless the UK government takes bold action, heart attack and stroke deaths related to air pollution could exceed an astounding total of 160,000 by 2030. Declaring a major public health emergency, the charity is calling for the government to adopt the World Health Organisation (WHO) guidelines on airborne particulate matter (PM) into UK law; to ensure stricter, health-based air quality guidelines.

Proving the necessity for such a change, results of the study showed that inhaling particulate matter damages the blood vessels, which increases the risk of blood clots, and in turn increases the risk of heart attacks and stroke. Typically traced back to everyday sources, such as vehicle emissions and construction sites, breathing in toxic PM is an unavoidable part of city life.

With a clear need to advocate clean air for cities, the reintroduction of nature makes it possible to create a cleaner, healthier urban jungle. Planting vegetation in and around city streets can reduce concentrations of PM by an impressive 60%. Crowned the first-ever ‘National Park City’, London has already recognised the power of plants, taking significant steps to increase valuable green space.

Going back to 2008, London started implementing environmental projects in order to reach its green goal of a National Park City. Introducing the Living Roofs and Walls Policy into the London Plan, the concept encouraged boroughs to utilise wasted space on new and existing structures, turning growing construction into valuable green space.

As a result, the city saw an annual increase in green construction practices in both large and small developments. By 2017, the Greater London Area alone boasted a 1.5 million m2 of green roofs, equating to an impressive 0.17m2 of greenery per inhabitant.

Appreciating the value of environmental architecture in improving public health and lessening pollution, London has since developed further green initiatives, such as the Urban Green Factor (UGF), as a way to ensure that all new major developments include an element of greening.

The UGF’s scoring system ensures that urban greening plays a prominent part in the planning process. Favouring green features, such as living walls and green roofs, the concept welcomes new construction that doesn’t come at a cost to people and planet.

Offering a range of benefits for both health and wellbeing, living walls and green roofs are fast becoming the go-to biophilic solution for forward-thinking construction. Able to transform almost any wasted vertical space into a thriving green oasis, these living, breathing installations help to reduce the negative impact of development within dense cities. 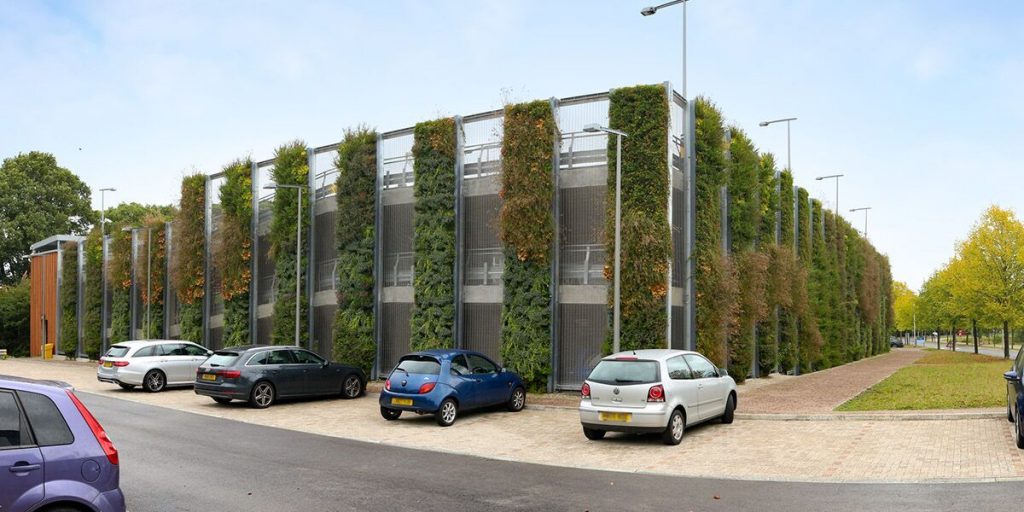 Harnessing the power of plants, these green features reinject nature back into highly populated urban areas, whilst helping to filter and generate clean air. Signalling a new era of greener construction practices, living walls and green roofs provide urban communities with an accessible connection to nature, even in the most unlikely of spaces.

Relevant to almost any style of build, from new developments to regeneration projects, living installations can be applied almost anywhere, turning vertical wasteland into an opportunity for nature to flourish. Even the eyesore that is the multi-storey carpark can become a thriving green haven that benefits the local community.

Carparks are a major contributor to harmful air pollution, with exposure to toxic air from vehicles having the potential to cause serious health and respiratory problems. However, with green design able to filter out up to 95% of the pollutants generated by vehicles, it has the potential to become an upright urban garden, that unexpectedly has a positive effect on the air that surrounds it.

Camouflaging the concrete exterior of urban builds, living walls and green roofs also enhance the overall wellbeing of city dwellers, with research showing that green views can help to reduce high blood pressure and depression. The injection of greenery also benefits the local wildlife, providing a valuable habitat for birds and insects to thrive – supporting biodiversity and providing a welcome view in the heart of a city.

Whether it is a refurb project for an existing structure or a new build, a living installation specialist can advise on the most suitable type of plant installation to suit the site, the environment and the people who will use it. This is important to ensure living walls and green roofs are successful in providing an array of benefits long-term.

Using their expertise and knowledge, a living installation specialist will be able to integrate the installation with the surrounding environment, climate and space, as well as the overall design brief. Each of these elements will be a factor in creating the planting palette, ensuring that the right selection has the ideal environment to thrive throughout the year.

Making the whole process as effective and efficient as possible, plants are often pre-grown offsite, then once fully established they are delivered as individual modules ready for installation. Helping to keep maintenance to a minimum, the modules are then installed alongside a bespoke irrigation system designed to keep the plants healthy whatever the weather or season.

Boasting benefits for the wellbeing of both our environment and local communities, living installations offer long term value, helping to drive a new era of green development. More than a planning tick box, the construction choices of today play a vital role in creating a healthier, greener future. By reintroducing nature back into urban environments across the country, the negative effects of city life can be lessened, for both people and planet.

To find out more about the installation process of living walls and green roofs, as well as a range of relevant case studies, go to www.ansgroupglobal.com.