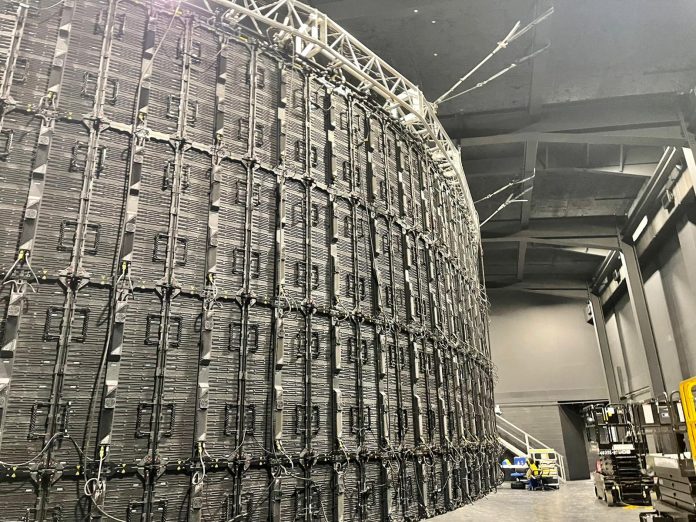 BRAC Contracts has announced the completion and handover of a new mixed-reality film studio and supporting facilities to global motion picture media specialist ARRI, alongside its existing facilities in Uxbridge

Work on the mixed reality film studio commenced in November 2020. Phase one included the construction of a 7.5m steel frame structure to bear the weight of the specialist curved screens supplied by Creative Technology; screed flooring; AHU and AC installations; lighting; and all associated electrics.

Phase two has just been completed following a hiatus to allow for studio viewings, involved the removal and replacement of an existing metal staircase with a timber one, and the installation of a mezzanine steel frame from which split level viewing galleries, one specifically for VIPs, were formed.

As part of this phase of work, a green room was constructed, along with dressing rooms, hair and make-up facilities, washrooms, and catering facilities.

The new LED volume stage provides ARRI with a studio that is one of the biggest permanent mixed reality production spaces in Europe.

BRAC Contracts partnered with architectural practice, Ackroyd Lowri, with whom they’ve worked on numerous projects in both the commercial and residential sectors.

‘A privilege to be involved in this exciting project’

Commenting on the project, managing director of BRAC Contracts, Adam Clark said: “The UK film and TV production industry is enjoying a boom fuelled largely by the rapid growth of the video streaming market and the rate at which additional production facilities are being planned and constructed has never been seen before.

“Indeed, a recent report by Lambert Smith Hampton estimated there was a requirement for up to 2.3 million square feet of new film studio space in the UK.

“It has, therefore, been a privilege to be involved in this exciting project and work alongside Ackroyd Lowrie once again.

“This was our first time working with CT Technology and it allowed the BRAC team to demonstrate its ability to deliver on complex and bespoke requirements – you can’t afford to cut corners when building a structure that will bear the weight of such valuable technologies.”

Ackroyd Lowrie, managing director and co-founder of Ackroyd comments: “With such a high-profile project it was imperative that we worked with a main contractor who was not only able to deliver the work to the required high standard, but also one who could manage the complex co-ordination of all key partners.

“This unique project involved a multifaceted design to retrofit and extend an existing storage warehouse into a pioneering and immersive mixed-reality facility.

“Its construction required detailed co-ordination with a variety of technology partners alongside delivery of highly technical and precise specifications. BRAC’s adaptable approach and commitment to ensuring exact requirements were achieved ensured the project was delivered on time with every crease being ironed out. It’s fantastic to see ARRI now take occupancy and we look forward to seeing the many creative projects this state-of-the-art facility generates.”

Speaking on behalf of ARRI David Levy, business development director, Global Solutions concludes: “ARRI has made a global commitment to be at the forefront of the exciting possibilities opened up by mixed reality shooting, but to make this a reality it’s imperative that we partner with the right teams to deliver the vision.

“The BRAC team worked with the utmost flexibility when it became necessary to split the project into two phases so that we could showcase the LED volume stage to interested production companies as soon as that element was complete. We’d welcome the opportunity to work with them again.”