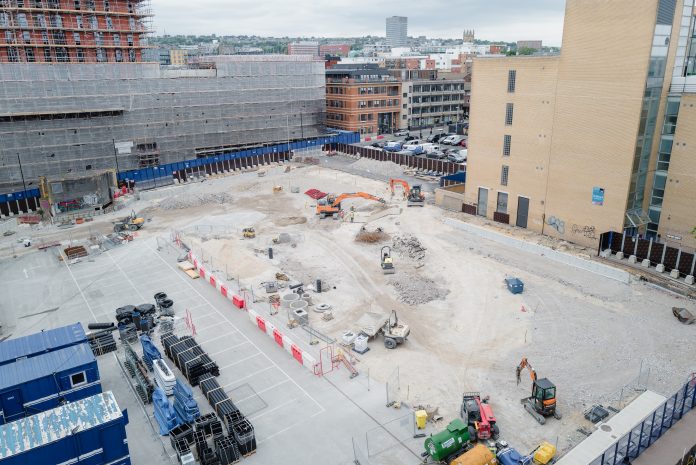 Monitors from the Considerate Constructors Scheme (CCS) have awarded Henry Boot Construction full marks for its ongoing work on a new urban park in Sheffield.

The site used to be a former fire station site and is located between Rockingham Street, Wellington Street and Carver Street.

Inspectors from the Considerate Constructors Scheme (CCS) checked the site for employee wellbeing, environmental impacts and respect for the community. Upon inspection, they praised the use of recycled materials in the design and the health-related support available to site workers.

Richard Grafton, head of policy & compliance, at Henry Boot Construction said: “This is the highest score that we’ve achieved under the new CCS criteria and scoring system and is testament to all the hard work that goes on to engage communities, support our employees and make our sites safe. Well done to Rob Bell and Jonathan Scaife on site for guiding the project to this brilliant score.

“One of our other sites in the Heart of the City development, which neighbours Pound’s Park, has already been registered as an Ultra Site – meaning it is recognised by CCS as a beacon of best practice. Our Cocoa Works site in York also has Ultra Site status and these are the only two sites in the whole of Yorkshire to be registered to this standard.

“Henry Boot is committed to achieving the highest possible standards and raising the bar across the industry and it’s brilliant that we’re able to do this at the same time as creating a relaxing and inviting urban space.”

Sheffield’s new urban park is set for completion in 2023