With the lack of homes available across the UK proving more problematic than ever, unlocking new residential development opportunities is vital

Reforming the planning process, alongside more investment into infrastructure and renovating derelict, brownfield sites in struggling areas, should be a major focus to increase housebuilding levels in 2019.

In the current political climate, which is unsteady at best, UK leaders must set out a vision for the country. Effective new policies are required to support housing objectives, particularly increasing the quantity and quality of affordable housing stock. This can only be achieved by aiding developers to accelerate housebuilding levels, which requires fundamental changes to the planning system.

Since 2013, developers have had a right to convert office space into residential homes without the need for planning permission. These permitted development rights are subject to less scrutiny than the general planning process, which has led to accusations that the quality and design of homes has declined. However, this is an unfair stigma.

Permitted development was introduced to make it easier to change the use of a building to increase housebuilding levels. While this has worked in essence, developers must navigate a complex process when wanting to go beyond simple projects; for example, when applying to change the use of a listed building. If this process were simpler, it could help the UK to meet its housebuilding targets – currently set at 300,000 per year by 2020 – while also protecting key, green belt land and restoring historical sites to their former glory.

At present, the housing shortage is under intense scrutiny and our countryside is being lost to large-scale housing developments. Between 2017 and 2018, 10 local authorities lost designated green belt areas – the largest decrease reported in recent years. Building on derelict brownfield sites is an ideal solution to prevent this, yet these schemes can be met with criticism. Transforming vacant buildings and brownfield sites should be looked upon favourably as a way to unlock further housing potential. Change of use projects can improve the aesthetics of areas and increase the number of homes – something the UK genuinely needs.

Forward-thinking Asian and Middle-Eastern countries, such as the UAE, have formulated a much simpler planning process. Large-scale masterplans, which inform developers of what can and can’t be built from the outset, prevent lengthy timeframes and indecisiveness. If the UK followed suit, I am confident that housebuilding levels would accelerate at record speed, helping to provide homes for the growing population.

The latest report from LendInvest, confirmed that smaller towns are becoming increasingly desirable for investors because of the extremely high demand for homes in strategic, satellite towns.

Young professionals and millennials are often forced out of city centres due to skyrocketing costs, encouraging the appeal of nearby commuter towns, where the cost of living is often lower. However, people will always want the freedom to travel to cities for work and leisure.

It’s essential for the Government to recognise this and better work with the private sector in 2019 to ensure that these towns can offer high-quality homes and provide reliable transport links.

Commuter towns in the South have been imperative to the property market for years, with the rising cost of living in London being the main driver. This trend is now being mirrored in the North. Areas that border larger cities like Manchester and Liverpool have become subject to massive regeneration to increase their appeal – Warrington and Oldham are prime examples. The government should help to fund this rejuvenation work to capitalise on the growing demand.

There is an overwhelming need for investment in struggling Northern towns, such as Burnley, Runcorn and Widnes, where job creation is low and the quality of housing and commercial space must be improved. Offering impressive, yet affordable, homes, where people genuinely want to live, will help drive individuals and families into these areas. This could help to save failing high streets and businesses, encouraging economic growth across the entire region and preventing overcrowding in core cities.

Often, declining areas are littered with derelict land and buildings that are ripe for investment. Transforming these sites into modern, city-centre style communities is a fantastic way to rejuvenate periphery towns, positioning them as viable living alternatives to neighbouring cities. It also increases the number of homes available, both for owner-occupiers and buy-to-let investors, without sacrificing any green belt land.

The government must consider the country’s infrastructure needs in 2019. As a Northern-based developer operating on a national level, I can easily identify the areas of the UK in which investment into infrastructure is paramount. For years, the North has played a secondary role to the South in terms of transport investment, but initiatives, such as the Northern Powerhouse, have the ability to change that.

I hope that 2019 will see the government offer a much stronger commitment towards infrastructure in the North. Roads and public transport in outer towns is very poor and even larger cities, such as Leeds and York, are lacking. People are attracted to areas with excellent transport links and there is not enough focus on local infrastructure investment, such as the promotion of smaller, commuter towns, which could attract greater levels of talent to the North.

Pushing forward major infrastructure projects, such as HS2 and Northern Powerhouse Rail, will be imperative if we are to galvanise the North’s economic potential and unite its towns and cities. We need more collaborative action from our political and business leaders to ensure that opportunities for economic prosperity are brought to fruition.

The bigger picture in housing

As an economic superpower in its own right, the aim of the game is for the North to continue to be a viable equal to the South, offering buoyant property and job markets across all towns and cities.

The Priestley Group has unlocked economic and housing potential in and around key cities, such as Bradford, Manchester and Leeds, by converting derelict buildings into high quality residential offerings. This helps to draw talent into areas, pushing them further towards economic success.

We’re also playing a pivotal role in regeneration, helping to improve residential offerings and drive people into areas they might otherwise disregard. Focusing on delivering high quality homes, particularly in struggling locations, will have a domino effect, inspiring further investment and positioning the areas as desirable places to live and work. 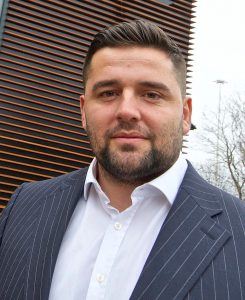