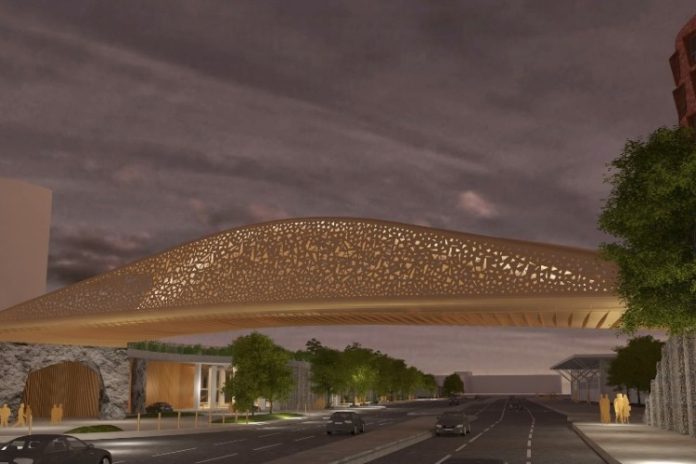 Cairn Group has been announced as the preferred bidder for the first phase of the Swansea Central hotel regeneration scheme, as the design for Swansea’s landmark bridge is unveiled

Swansea Central Phase One is being developed by Swansea Council as a catalyst for wider regeneration. It includes a 3,500-capacity indoor arena, new parkland, almost 1,000 new car parking spaces, commercial units, and more than 30 homes.

Swansea Central Phase One is being built near the hugely popular LC leisure centre over both sides of the busy Oystermouth Road.

It is due to be open in the second half of next year.

The new bridge, designed by Swansea artist Marc Rees in collaboration with ACME. The bridge – up to 12m wide – will link the two halves of the expansive site and will provide a strong link between city and sea.

Funding has come from the £1.3bn Swansea Bay City Deal for the arena and from the Welsh Government’s Active Travel Fund for the bridge.

Tim Wood, project director at Buckingham Group Contracting, said:  “We have been working closely with Marc Rees and ACME to develop the detailed construction and structural designs for the bridge.

“Our aim is to ensure that the finished bridge delivers the architectural, aesthetic qualities that are required and that it creates a stunning visual gateway to Swansea.”

David TC Davies, UK Government Minister for Wales, said: “The UK Government is working to bring greater investment and growth to communities across Wales and funding the redevelopment of Swansea city centre as part of the Swansea Bay City Deal represents real progress in achieving those aims.

“Working hand-in-hand with local government and business, we will help create new and exciting economic opportunities to unleash the potential of south-west Wales.”