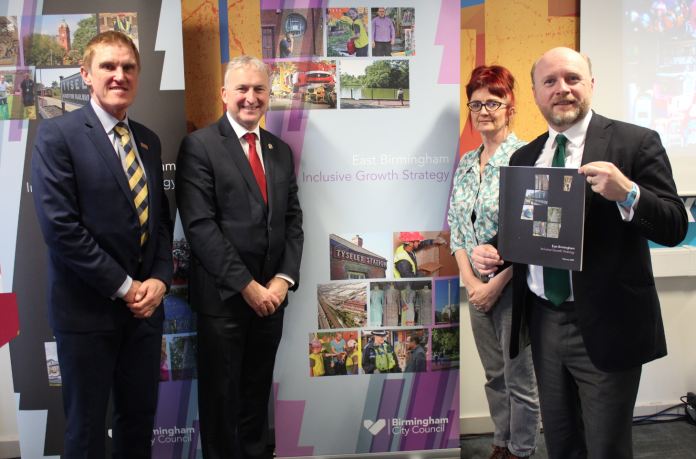 Much of East Birmingham currently falls within the top 20% most deprived areas in England. However, there are also huge opportunities coming to the area including HS2, the Commonwealth Games, the Midland Metro expansion and other major projects that will transform the city.

East Birmingham will also be developed as a centre for sustainable and low carbon technologies which will make a major contribution to achieving the city’s target of a zero-carbon Birmingham by 2030.

The new strategy aims to capitalise on investments so that that local communities in East Birmingham are able to reap the benefits. Over the next ten years, the proposal has five areas of focus: improved local services; business, employment and skills; local places and green spaces; Midland Metro East Birmingham to Solihull extension and; the heavy rail network.

This strategy brings together public sector organisations, businesses and most importantly of all, the local community to ensure that the growth the area sees is inclusive for the people who currently live there.

All of this will be delivered through the East Birmingham Board, a body established to ensure that East Birmingham makes the most of the massive opportunities that are coming to the area.

Councillor Ian Ward, leader of Birmingham City Council said: “I’m more than familiar with the challenges this part of the city faces so I’m absolutely delighted that these plans have been set into motion and are open to the public for their comments, views and input as part of our consultation.

“By many measures, Birmingham is currently booming, with inward investment at record levels, the Commonwealth Games on the way and major projects like Smithfield, Curzon and others transforming the city. But how many people in East Birmingham feel they have a real stake in that growth?

“That is exactly why we’ve developed this strategy; because we’re committed to reducing inequalities and building a fairer city. A city where the benefits of growth are shared more fairly, providing new opportunities for local people to change their lives for the better and delivering lasting improvements to living standards, education, health, the environment and transport.”