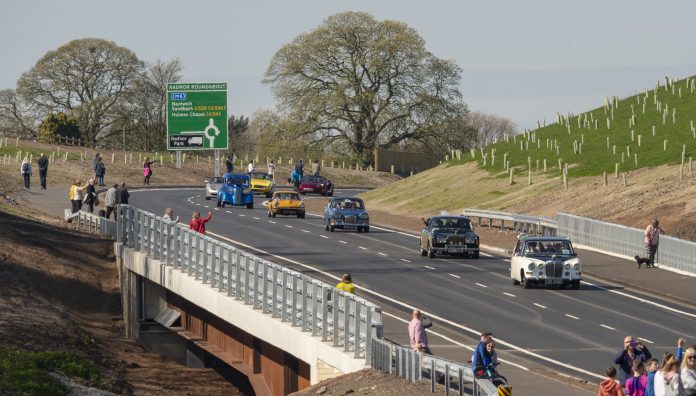 The opening of Congleton’s new link road was marked by a cavalcade of more than 50 classic cars driven by local enthusiasts along the 5.5km newly named Wolstenholme Elmy Way

The road, which is the borough’s largest infrastructure project to date, is named after Congleton’s famous pioneering educationalist and campaigner for votes for women, Elizabeth Clarke Wolstenholme Elmy.

The route will relieve the Cheshire East town of some of its historical traffic problems, create road space for cyclists and pedestrians and improve air quality for residents while opening up new development opportunities for employment and housing.

Despite the dual challenges of the Covid pandemic and harsh winter weather, the council’s contractor, Graham, worked hard to reduce the delays to the project, which was originally due to open late last year. The scheme has also been delivered within budget.

The new highway joins the A534 Sandbach Road to the west and the A536 Macclesfield Road to the north, opening up connectivity and improving travel between Macclesfield, Congleton and the M6.

It will release 20 hectares of new employment land with the potential to create 3,000 jobs by 2035.

Cheshire East Council is contributing £24m towards the scheme with central government and developer contributions meeting the balance.

Planning for the Congleton link road began back in 2012 with various routes considered by Cheshire East Council. After public consultation, a planning application was submitted in September 2015, before permission was granted the following July.

The Department for Transport gave the final go-ahead for the council for their element of funding, enabling the council to acquire the land for the route in 2018, before Graham began construction in 2019.

Delivered successfully and within budget 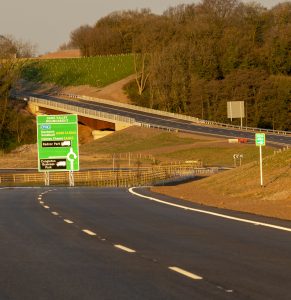 Alastair Lewis, contracts manager for Graham, said: “Despite the impact of the pandemic and some tough recent winter weather, we have been able to continue our works in a safe manner, while following government and public health guidelines, and have delivered the link road as close to the original schedule as possible – and within budget.”

Frank Jordan, Cheshire East Council’s executive director for place, said: “The opening of Wolstenholme Elmy Way is a real cause for celebration and a fine achievement – not only for the council, Graham and road users but, above all, the people of Congleton.

“Cheshire East Council is delighted this complex and significant project has been successfully delivered – and within budget – despite the additional challenges of two extremely wet winters and the unprecedented impact of the Covid pandemic.

“Coronavirus affected the schemes’ suppliers and meant contractors had to take special measures to protect workers.

“Given the size and complexity of the project – and the additional challenges of the past 15 months or so – the progress made from drawing board to build completion has been astonishing. Everyone involved in this scheme should feel tremendously proud.”