Construction activity accelerated in July at the fastest pace since October 2015, but analysts warn to prepare for a “chilly autumn” as furlough schemes come to an end

UK construction activity signalled a sharp and accelerated expansion of business activity during July, led by another strong increase in housebuilding.

New orders also picked up for the second month running, with survey respondents commenting on a boost to sales from easing lockdown measures and the restart of work on site.

However, the speed of recovery was insufficient to prevent additional cuts to employment numbers across the construction sector and the rate of job shedding was faster than in June.

At 58.1 in July, up from 55.3 in June, the seasonally adjusted IHS Markit/CIPS UK Construction Total Activity Index registered above the 50.0 no-change threshold for the second consecutive month.

The latest reading signalled the steepest expansion of overall construction activity since October 2015. 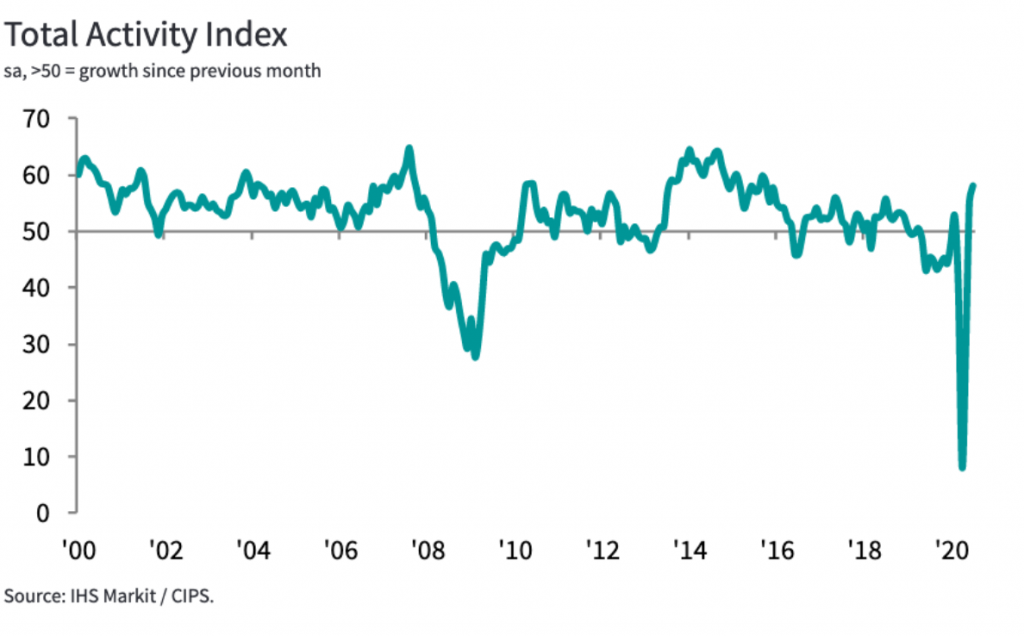 Residential building was the main driver in July, with activity increasing to the greatest extent since September 2014. Survey respondents commented on the release of pent up demand and reduced anxiety among clients.

Commercial work and civil engineering activity both expanded at slightly quicker rates than in June. Growth was often attributed to the catch up of work that had been delayed during the Covid-19 pandemic.

July data indicated the fastest rise in new orders since February, although the rate of expansion remained softer than that recorded for output levels.

Some construction companies noted a gradual improvement in demand from the lows seen during the second quarter of 2020. There were also reports that clients remained apprehensive about committing to new projects, resulting in intense competition to secure sales and squeezed margins.

Firms are optimistic overall about the prospect of a recovery in construction activity during the next 12 months. Around 43% of the survey panel expect a rise in output over this period, while only 30% forecast a fall.

Worries about the speed of recovery contributed to a sustained decline in staffing numbers during July. The latest data signalled a sharp rate of job shedding, with around one-in-three survey respondents reporting a fall in employment.

Meanwhile, input cost inflation reached its highest level since May 2019. Pressure on costs was partly linked to stretched supply chains, as signalled by another steep lengthening of average lead times among vendors in July.

Duncan Brock, group director at the Chartered Institute of Procurement & Supply, said: “Remobilisation in the construction sector intensified this month, with another significant jump in output following the reopening of businesses and supply chains after the first Covid wave.

“Housebuilders were the most active with the fastest rate of growth since September 2014, as operating capacity improved and anxious clients were ready to unleash deferred orders at the highest rate since February.

“Though builders were slightly less optimistic about prospects for the year ahead compared to the previous month, recovering lost ground gives hope that the damage caused by the pandemic may be less entrenched if recovery continues along this robust path.

“However, with another sharp fall in staffing levels, the number of redundancies increasing and competition for raw materials resulting in higher costs, holes are already starting to appear just as the sector regains its strength.

“After a summer of this blistering return to growth, building companies should prepare for a chilly autumn as furlough schemes come to an end and the real strength of the UK economy is revealed.

“Making up for lost time is one thing, but sustainable real growth is what the sector needs otherwise this recovery is just building on soft sand.”