Construction companies in the UK have recorded yet another drop in business during November, the slowest decline since July 2019, IHS Markit/CIPS UK survey shows

All three broad areas of construction work recorded a fall in output during November, with civil engineering the worst performing category, followed by commercial building.

Construction Total Activity Index rose to 45.3 in November, from 44.2 in October, to signal the slowest drop in overall construction output for four months. Reduced business activity was attributed to a lack of new work to replace completed contracts.

In some cases, survey respondents suggested that unusually wet weather in November had also weighed on output.

The slower decline in housing activity helped to moderate the overall drop in UK construction output signalled by the survey in November.

Latest data pointed to another sharp reduction in new work received across the construction sector.

Construction companies reported a sustained decline in their staffing numbers during November. A number of firms noted that softer demand had prompted cost-cutting efforts and led to the non-replacement of voluntary leavers.

Mirroring the trend for employment, latest data revealed a solid reduction in purchasing activity across the construction sector. Weaker demand for construction products and materials allowed suppliers to catch up on their workloads in November.

As a result, vendor lead-times lengthened to the smallest extent since September 2010. Subdued demand for raw materials led to fewer price rises by suppliers in November. Moreover, latest data indicated that overall input cost inflation remained the among the lowest seen since early-2016. 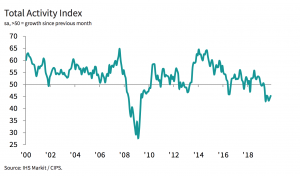 Expectations for construction in 2020

Looking ahead, construction companies remain relatively cautious about their prospects for growth over the course of 2020.

The degree of business optimism was little-changed since October and still much weaker than its long-run average. Reports from survey respondents suggested that this largely reflected concerns about the domestic economic outlook and worries that political uncertainty will continue to hold back client confidence.

“The speed of the downturn in construction work eased a little since October, but the survey continues to signal a notable drop-off in business conditions compared with the first half of 2019.

“Greater spending on transportation and energy projects had been expected to help boost infrastructure work this year and next, but survey respondents indicated a sustained soft patch for overall civil engineering activity in November.

“Some construction companies reaffirmed their concern about the delivery of road and rail projects, with delays to contract awards acting as an additional headwind to growth projections for 2020.”