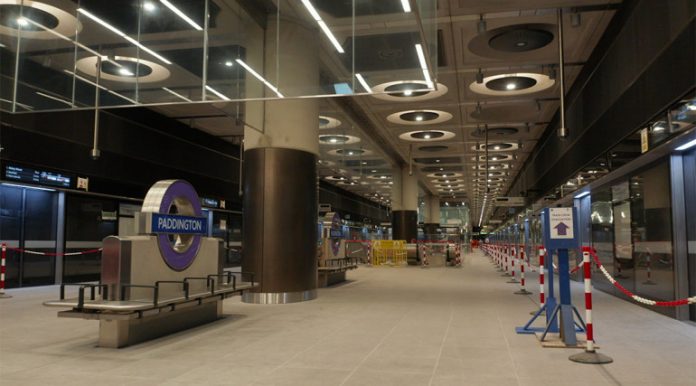 The Costain Skanska Joint Venture is preparing to hand over the third Crossrail station, the Paddington Elizabeth line station

Construction works are now sufficiently finished on the Paddington Elizabeth line, paving the way for commissioning activities to begin.

The station has reached its T-12 landmark, this means the station is now considered to be 12 weeks away from being ready for handover to Transport for London (TfL), who will operate the Paddington Elizabeth line.

Work at the station will now focus on the extensive testing and commissioning of systems ahead of the Elizabeth line opening.

Paddington Elizabeth line station has been built by Costain Skanska Joint Venture (CSJV) and will have step-free access for passengers from street to train.

‘One of London’s major gateway stations’

Mark Wild, chief executive of Crossrail, said: “This is an incredibly important moment for the team at Paddington station and for the Crossrail project as a whole and is another important step for us on the journey to opening the Elizabeth line.

“Paddington is an historic and much-loved part of our rail network and the new Elizabeth line station is a spectacular new addition, which further enhances its role as one of London’s major gateway stations providing connections to London’s transport network and rail services to west London and Heathrow, the Thames Valley, Wales and the west of England.”

“Delivery of this complex project is a huge tribute to the thousands of people who have created it. There is much still to be achieved and we will continue to work collaboratively to deliver this station which will benefit people for generations to come.”

Sharon Thompson, station handover lead for TfL, added: “Crossrail and Costain Skanska are making progress in finishing the works and we look forward to reaching handover, as part of our preparations for opening the Elizabeth line as soon as possible.

“Paddington is a really striking station and will provide a vital interchange with the Bakerloo, Circle, District and Hammersmith & City lines as well as National Rail services.”

Crossrail will move into the next major stage of the project, with the start of trial running and intensive testing later this year.

The railway is still on track to open in the first half of 2022.