A study by Queen’s University Belfast and Trinity College Dublin found that around 51% of construction workers in 2018 were freelancers and this is set to increase as freelance estimators become more widespread.

From a business perspective, hiring freelance estimators is attractive as it doesn’t carry as much risk as hiring a full-time team. As freelancers are usually hired for a project – or series of projects – employers know they only pay a freelance until projects are finished, and the business has gained the promised output.

Although freelancers can cost more per day than permanent employees, in times such as now when the market has taken a 5.9% output downturn, employers can more effectively handle fluctuations in demand if they are hiring someone to work per project or task. It guarantees they will get the output they need from a freelance estimator and means they won’t have to keep them on payroll after.

Not being contracted to a company gives an estimator flexibility. Although this is more high-risk than being employed full-time, it does also give them the freedom to seek out active projects in times of economic difficulty.

For those who are specialised, it means they can work on several projects, rather than being present throughout a whole project and only needed for a relatively small part.

For experienced estimators, choosing (or perhaps being forced) to go freelance also helps top up lost income. Five of the usual construction contractors in the UK top ten dropped in the league table considerably in March, although some began to climb the table again in April. However, as some of these have in excess of 26,000 employees each, choosing to close even half of their construction sites would leave many employees on furlough or out of work completely. With that logic, it’s no surprise that there’s been an increase in estimators taking up freelance work.

Freelance work in construction isn’t a walk in the park. There are risks associated with it, as with any degree of self-employment. But, perhaps in the current economic climate freelance work is seeing a surge because of the flexibility and stability it can provide in troughs in demand.

Estimators can cast their nets wider by putting their name to several projects and reap the monetary benefits of that. Construction is quiet now, but maybe freelance estimators could be what the industry needs to react quickly to the anticipated influx of future projects.

If you’re a freelance estimator or are considering the switch, you need to give yourself the best chance of being ready for this challenge. Investing in estimating software that can be delivered remotely – from installation to training – means you can be ready for today and the future.

Get in touch with the Access Group team today to find out why Access ConQuest Estimating is your perfect tool. 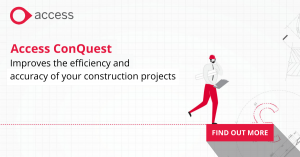