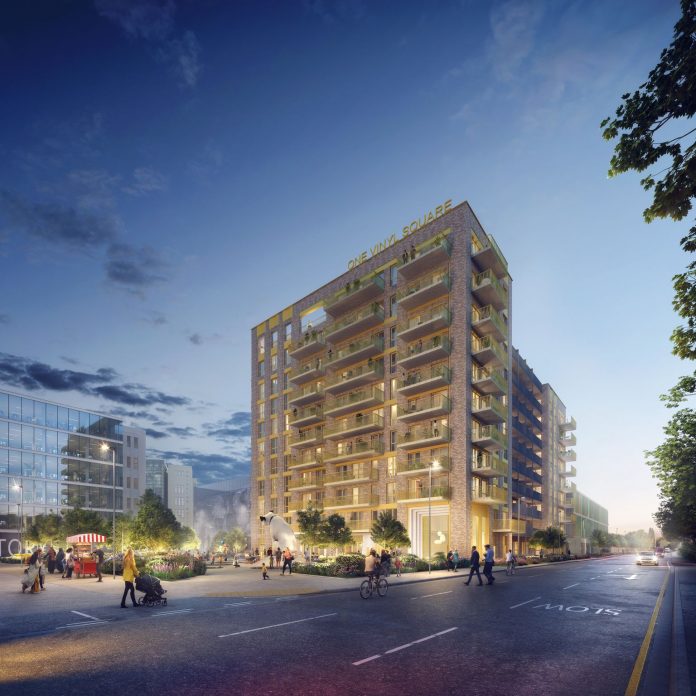 Developed by Joseph Homes, One Vinyl Square represents one of the final pieces of U+I’s transformation of the Hayes town centre site.

One Vinyl Square sits to the west of the largest public space at The Old Vinyl Factory, Vinyl Square, which serves as the main arrival space. It will combine high-quality planting, play space and a strong narrative relating to the musical history of the site, including the 6m sculpture of Nipper the Dog, the emblem of HMV, the globally famous brand that was born at The Old Vinyl Factory.

The associated landscaping will also be inspired by and feature references to Alan Blumlein, a senior sound engineer and inventor at EMI’s Central Research Laboratories, credited with inventing stereo.

The planning permission represents a significant step forward for the Old Vinyl Factory masterplan, which was designed by Studio Egret West and extends across 17 acres near Hayes town centre and Crossrail station.

The Old Vinyl Factory has been reimagined as a mix of restored Art Deco office buildings, new homes, innovation and educational hubs, shops, cafés, restaurants and a climbing centre.

Richard Upton, chief development officer at U+I, said: “One Vinyl Square will serve as a centrepiece and landmark building for U+I’s Old Vinyl Factory masterplan, as we step closer to realising our ambitions of revitalising Hayes town centre.

“The scheme has completely rejuvenated a previously underutilised yet culturally significant site while delivering hundreds of much-need new homes and jobs for the Hayes community.

“That the project was approved unanimously at Hillingdon Council’s first ever virtual planning committee is testament to the fantastic work and vision of Joseph Homes and the design team.”

Craig Carson, development director at Joseph Homes, added: “It is great to see planning authorities like Hillingdon working with SME developers during these challenging times.

“We would also like to thank our consultant team, including JTP Architects and Lichfields, who worked with us to ensure this development embodies our Live Well principles throughout.

“It has also been a pleasure working in close collaboration with U+I’s development team and we look forward to being an integral part of The Old Vinyl Factory story and help landmark the main civic space for the masterplan.”