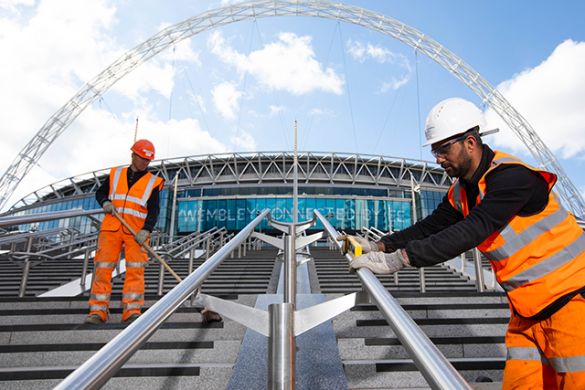 Work to remove the stadium’s existing pedway structure began onsite in November 2020, followed by the construction of a new, grand set of 48 step

The 550 tonnes of structural steelwork required for the new staircase was then erected in six days, followed by the installation of precast concrete, specialist waterproofing, cabling, a stainless steel drainage channel and in situ granite paving.

36 glass rooflights were pre-installed within the precast units on the ‘Olympic Landing’ at the top of the steps, providing daylight to the undercroft area below.

The lighting was finished with 14 lamp columns and 60 illuminated handrails.

Works continue on the public realm surrounding the steps and the project is due to be fully complete in June 2021.

Delivering on a long-term strategy and with Quintain working in collaboration with Brent Council, who have co-funded this project, the Olympic Steps complete Quintain’s major transformation of Olympic Way, which has included repaving, a 50% widening, programmable lighting, ceremonial banners, a curated retail offering, and an award-winning tree planting strategy.

With a width of 40m, The Olympic Steps have liberated over 12,150m2 of new public space at ground level – an area bigger than The SSE Arena, Wembley or the football pitch inside Wembley Stadium itself (7,245m2).

John Cox, divisional managing director of VolkerFitzpatrick, said: “Our team has worked safely and collaboratively, within a tight timeframe, to deliver the new Olympic Steps to an exceptionally high standard.

“We are proud of the part we have played in improving this iconic structure, which visitors can enjoy for years to come.”

James Saunders, chief executive of Quintain, added: “A fitting entrance to the National Stadium, the Olympic Steps mark a new chapter in the evolution of Wembley Park, replacing the old pedway.

“This elegant new public space celebrates Wembley Park’s history, embraces its future and will be a welcome new space for the residents of Wembley Park and the millions more who will visit the neighbourhood to work, shop and play.”