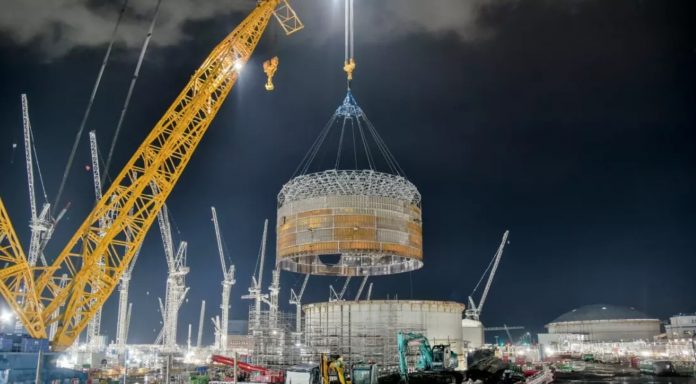 Now being prepared for the final lift into the first reactor building, the 17m-tall ring with a diameter of 47m was built 36% faster than the first by teams using the experience gained during the construction of the first ring.

The prefabricated steel ring, which forms part of the reinforced cylinder around the nuclear reactor, was lifted out of a bunker where it was constructed in factory conditions – one of the innovations to improve quality on the project.

Prefabrication inside these bunkers reduces the need to work at height or in bad weather and the work can be completed and checked in a controlled setting.

Big Carl will lift more than 500 prefabricated steel and concrete elements weighing up to 1,600 tonnes.

In 2019, Big Carl’s first lift was a great success, engineers at Hinkley Point C worked through the night to complete the first big lift.

The lift had been carefully planned to take advantage of a small weather window last night. The project is now focused on completing the base of Unit Two in 2020, as planned, 12 months after Unit One.

Hinkley Point C managing director, Stuart Crooks, said: “The first big lift is another impressive achievement and I want to thank the teams who’ve worked so hard to make this possible.”

Commenting on the second big lift, Stuart added: “Our belief that we can do things better drives innovation at Hinkley Point C.

“As we build the first UK European Pressurised Reactor (EPR) we are learning and improving all the time.

“This is leading to improved productivity as we build Hinkley Point C’s twin reactors. We will use that experience to underpin our plans for two more identical reactors at Sizewell C.”