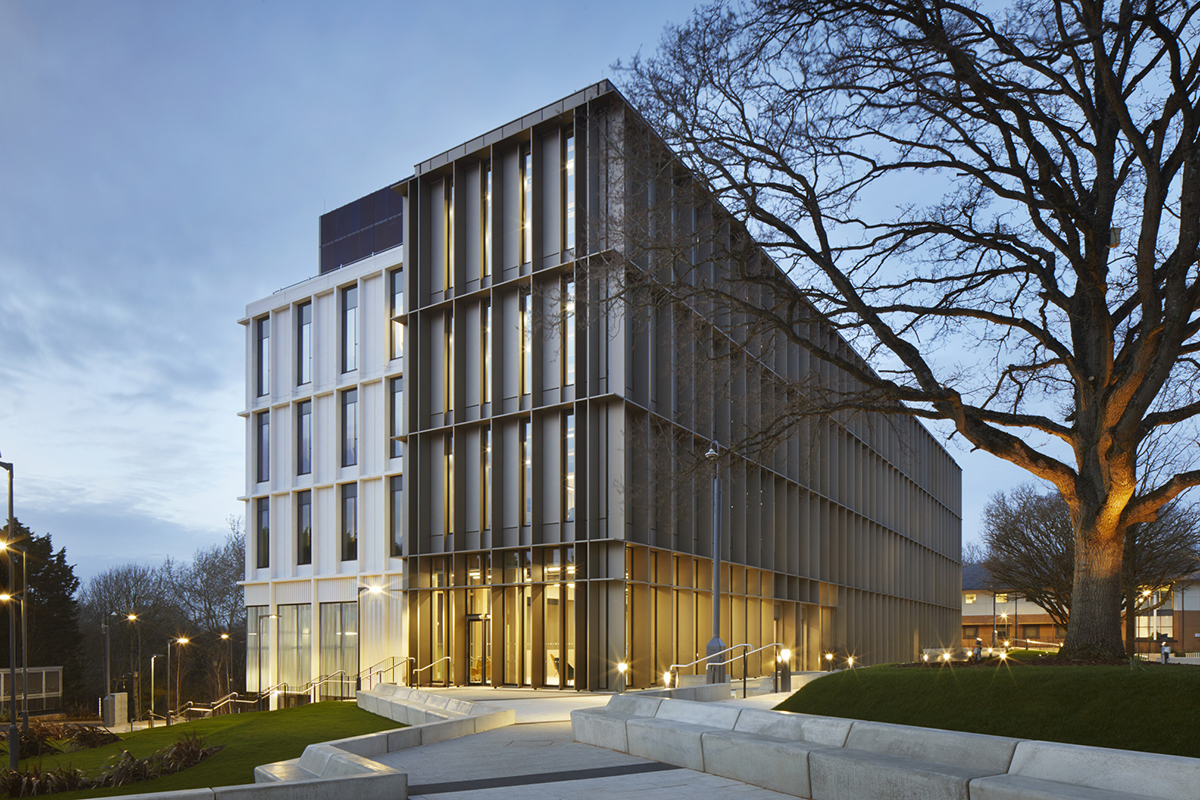 The project has unlocked a whole new revenue stream for the company, which is now growing its off-site manufactured projects to promote greater sustainability in construction.

The Net Zero World initiative is driving construction companies to look for alternative, technology-driven ways to construct off-site manufactured buildings. Willmott Dixon is paving the way for environmentally-friendlier processes which is evidenced in the successful erection of the University of Warwick’s 7,000 square metre, five-storey Interdisciplinary Biomedical Research Building (IBRB) in 2020.

Nick Preedy has delivered two multi-million pound projects for the University of Warwick in his role as Construction Manager at Willmott Dixon.

The first – a 1,550 square metre Sports and Wellness Hub – received gold honours in the Leisure category at the 2019 UK Construction Manager of the Year (CMYA) Awards. And its successful execution led to Willmott Dixon being commissioned to manage construction of a £33 million Interdisciplinary Biomedical Research Building at the university’s Gibbet Hill campus in 2020.

With a three-month overlap between completing the Sports and Wellness Hub and breaking ground on the IBRB project, careful planning was critical to maintain high standards of work. Nick and his team used Powerproject for both – however, the software played a pivotal role in determining how the research centre would be constructed.

Ambitiously, Willmott Dixon proposed a modern methodology for the IBRB, prefabricating 50% of the building off-site. This pre-manufactured value (PMV) would include a hybrid pre-cast concrete frame, glulam timber frame, and 2,000 square metres of pre-glazed concrete cladding.

While the use of offsite manufacturing techniques is growing fast in the construction industry, when Willmott Dixon first pitched the idea to the University of Warwick, it was a very new approach.

To prove the benefits of pre-fabrication, Nick’s team used Powerproject to demonstrate that off-site manufacturing would reduce the number of site deliveries from 4,000 to 2,200 and halve the number of workers.

Just eight installers and two supervisors were needed to assemble the precast concrete frame, while three people could put the timber frame together, and the cladding could be installed by four people using one tower crane.

Streamlining on-site resources significantly reduced disruption to the 26,000 students and 7,000+ members of staff that work on the University of Warwick campus. And the proposal also included designing a 27-metre tall factory-assembled mega-riser, which could be installed in just two days – saving 18 weeks on the project timeline.

“We used Powerproject to plan timelines for a traditional build versus using modern off-site construction methods. We were able to show the university that not only were they getting a higher quality build, but our approach resulted in half as much disruption to students and staff.” – Nick Preedy, Construction Manager, Willmott Dixon

In addition to saving time and complexity, Willmott Dixon’s use of modern methodologies also reduced the project’s climate footprint. Pre-fabrication limited material waste, and fewer deliveries generated lower vehicle emissions. This was enhanced by the decision to clad the building with 390 vertical PV solar panels to offset 4,600kg of CO2 emissions, in-line with the university’s strategy to become net zero by 2030.

Although offsite manufacturing is more efficient, there are risks to this approach, as every element has to be delivered on-time and built to specification.

Using Powerproject, Willmott Dixon was able to create risk profiles that identified critical points where time could be lost, modelling the consequences of delays and how work could be rescheduled.

“Without having Powerproject in place, I don’t think we would’ve committed to some of the off-site components that made the project such a huge success. We could see exactly what everyone needed to do and model the impact of any changes on the project as a whole.”

But ironically, despite being able to adjust schedules easily using construction project management software, the team’s decision to use modern assembly methods meant Covid-19 had little impact on progress. In fact, Willmott Dixon was able to deliver the Interdisciplinary Biomedical Research Building on-schedule in just 118 weeks.

The off-site construction supply chain is still immature, so Nick and his team expanded their remit to lead manufacturing logistics – using Powerproject to gather true time and resource data from stakeholders.

“We spent more time visiting factories than actually being on-site during the project. During those visits, having Powerproject open in meetings allowed us to capture data from our contractors and input it there and then, so the timeline was always completely up-to-date.”

By taking ownership of the full project management scope, Willmott Dixon was able to capture every piece of data that was within Powerproject without needing to integrate third-party software, for a complete overview of project progress.

Several manufacturers were so impressed by Powerproject that they decided to invest in the software themselves; meaning Willmott Dixon has a common technology in place for future construction projects.

The University of Warwick was also impressed by the insights Powerproject delivered. Instead of creating PDF reports, Nick’s team held a weekly call with university staff on a Friday afternoon, screen sharing live data from Powerproject. The university has since instigated weekly catch-ups for all its campus development activities.

And the icing on the cake: Nick Preedy won gold in the Higher Education category at the 2021 UK Construction Manager of the Year (CMYA) Awards.

The power behind successful projects: book a demo to experience Powerproject by Elecosoft.

*Please note: This is a commercial profile.